While the Russians fear being called up, Putin seems ready to escalate his war in Ukraine 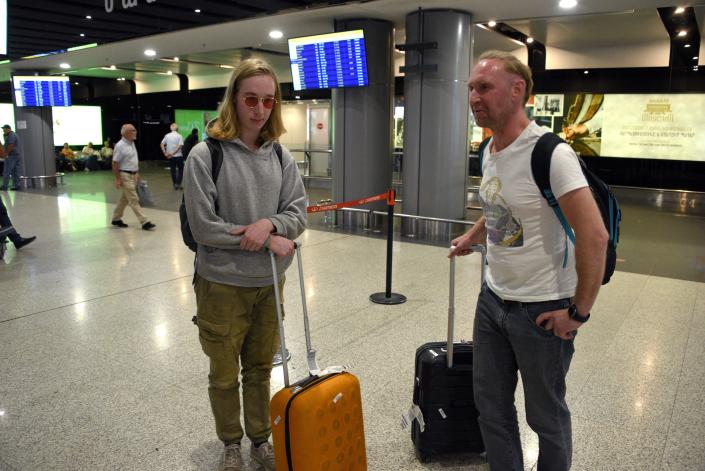 Kyiv, Ukraine: Russian reservists head to the front lines in Ukraine after President Vladimir Putin ordered a partial mobilization of its military reserves. But the measure has not gone down well. In the hours after Putin made the announcement, thousands of Russians in cities across the country defied the country’s blanket ban on unauthorized demonstrations to take to the streets in protest. More than 1,000 were arrested, according to an independent Russian monitoring group.

And while the Kremlin denies an exodus is taking place, there has been clear evidence that Russians, mostly men of fighting age, are trying to flee their country to avoid fighting in Putin’s was in Ukraine.

As CBS News correspondent Debora Patta reports, Russian men, reservists between the ages of 18 and 50 across the country, began receiving summonses to report for military service just hours after Putin made the announcement on Wednesday.

Video has shown youngsters boarding buses, waving hastily and tearfully goodbye to their families as they head to training camps.

For your loved ones left behind, there is only the cold grip of fear. Putin’s professional soldiers have not fared well recently on the battlefields of northeastern Ukraine, where they have lost much of the territory they occupied quickly after the invasion began on February 24.

Russian officials say the country has lost an estimated 6,000 soldiers, but the US military estimates that close to 80,000 Russian soldiers have been killed or wounded during the war. Ukraine has also suffered huge casualties, with a commander putting the figure at about 9,000 a month ago.

But the counteroffensive launched by Ukrainian forces in and around Kharkiv, the country’s second largest city, just a few weeks ago has sent Russian forces running — and has given a significant boost to Ukraine’s war effort.

Many Russians, who still rely heavily on the country’s state-controlled media for information, will not have a full picture of the circumstances on the ground across the border in Ukraine. But the Kremlin’s effort to obscure the truth apparently failed to stop a rush to the border this week following news of the reservist call-up.

Flights out of the country have been solidly booked for a couple of days as Russians try to escape conscription.

“That’s why I’m here,” said a Russian passenger who identified himself only as Alex after getting off a plane Thursday in Istanbul, Turkey. “Not many Russians want to fight and join the army.”

Land border exits from Russia to neighboring Georgia, Finland and Serbia have also experienced a traffic jam in recent days.

In Russia’s far east, however, a long line that formed late this week was of new recruits, men who were willing or simply unable to dodge war, boarding military planes.

Many of the reservists who received citations this week have never fought in a war, let alone one that has already put Russia’s hardened fighters in the rear.

Ukraine’s soldiers may be outgunned and outmanned by Russia, but Ukrainian Special Forces Senior Lieutenant Taras Berezovets, who led the counter-offensive in part of the Kharkiv region, told Patta his men are more agile and have a vital advantage: technology.

Satellite communication devices provided to Ukraine by its Western backers have been used by the country’s troops to communicate anywhere, anytime and without being easily detected.

It has given them a modern warfare advantage over the invading forces.

Berezovets said the technology had “never been seen before” on the battlefields of Russia’s war against his country, and “played one of the key roles in the battle for the Kharkiv region.”

It was “one of the reasons the Russians lost, because they are completely out of date,” he told Patta.

But Ukraine’s leaders and their troops know the war is far from over. In fact, it could be about to escalate.

On Friday, the de facto administrations in four Ukrainian regions still occupied by Russia: Donetsk, Luhansk, Kherson and Zaporizhzhia. started holding referendumsasking residents if they want their places of origin to become part of Russia.

The Russian-organized vote in the occupied territories will surely go Moscow’s way, and the results will give Putin an excuse to unilaterally annex the regions, only as it did with the Crimean peninsula in Ukraine in 2014.

But once they have taken place, Putin is expected to quickly declare the four Ukrainian regions Russian territory, and could use that as a pretext to claim that Ukrainian forces, while fighting to retake occupied territory, are attacking Russia.

The Russian president, announcing his partial military mobilization earlier this week, said he was prepared to turn to more lethal weapons in his arsenal, including nuclear weapons that could be used in local or regional tactical attacks.

“Our country also has various means of destruction,” Putin threatened. “And when the territorial integrity of our country is threatened, in order to protect Russia and our people, we will certainly use all the means at our disposal. It is not a hoax.”

Inside a US Customs and Border Protection processing center.

If you're on Twitter and following the news about China, chances are you've heard a pretty wild rumor recently: that President Xi Jinping...
Read more

The family of Avicii, the late multi-platinum Swedish DJ, has sold 75% of his recordings and master releases to Pophouse Entertainment, the Stockholm-based company...
Read more
Load more

A Republican from Utah decided to shame herself by rapping her political platform earlier this month.The candidate looked at the camera during the rap...
Read more

Hundreds of Inline Skaters Take to the Streets Weekly: NPR

Every Wednesday night, a horde of inline skaters rolls through New York City. They're fueled not by...
Read more

If you're on Twitter and following the news about China, chances are you've heard a pretty wild rumor recently: that President Xi Jinping...
Read more