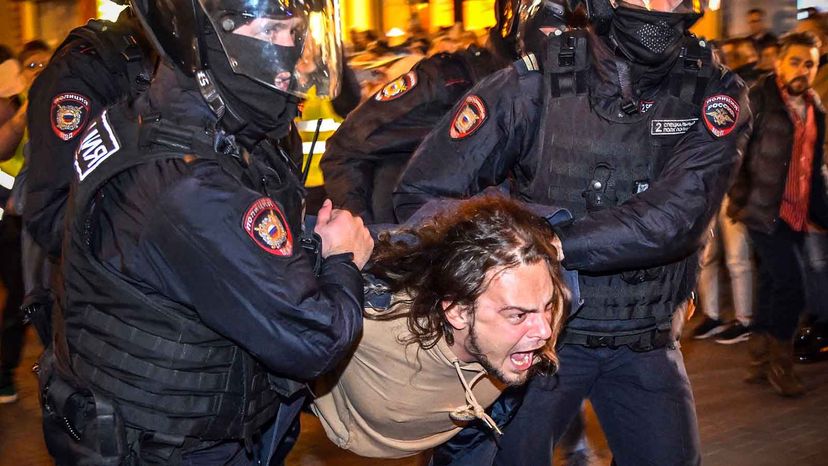 Information is so tightly controlled by the Russian state media that it is not surprising that much of the population has supported the war, given the way it has been portrayed inside Russia, says Jonas. but we know anti war protests they have erupted all over Russia since Putin’s announcement, including in Moscow. As many as 1,300 have been arrested. “The fact that the protests are now widespread is a sign of real dissatisfaction with the war,” says Jonas.

Jonas says that the mobilization also indicates that the reservists do not want to participate in this operation.

“[The mobilization] shows that the ‘special military operation’ has failed and most reservists have no desire to participate in this war,” he says. “It is [also] it is a tacit acknowledgment of a failure to achieve military objectives. It will take time to train, organize, equip and transport [reservists] to the battlefield so that the effects are not felt for months.

Queues of cars miles long have also formed at the Russian borders with Georgia and Finland, while men of service age try to flee from the mobilization. However, other European countries, including Lithuania, Latvia, Estonia and the Czech Republic, deny their entry.

Is meditation magical for mental health?

ROME (Reuters) - Italians will no longer have to wear masks on public transport, the Health Ministry said...
Read more

NAIROBI, Kenya — An Ebola outbreak in Uganda, caused by a strain for which there is no approved vaccine or drug treatment, is stoking...
Read more
Load more

Bitcoin miners get trapped in a bear pit

By Medha Singh and Lisa Pauline Mattackal(Reuters) - Think of the beleaguered bitcoin miner.By the end of 2021, miners were toasting the town with...
Read more

Why basically everyone should be screened for anxiety disorder

Apple The always-on display feature launched with the iPhone 14 Pro and iPhone 14 Pro Max, forcing the lock screen to remain on and usable...
Read more

Is meditation magical for mental health?

ROME (Reuters) - Italians will no longer have to wear masks on public transport, the Health Ministry said...
Read more