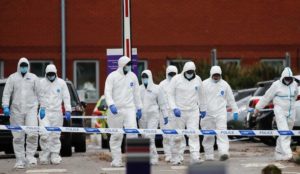 “In fact, Allah has bought the believers their lives and their wealth, because the garden will be theirs, they will fight in the way of Allah and they will kill and be killed.” (Quran 9: 111)

Police investigating a terrorist incident outside a hospital in Liverpool have named the man killed in the blast as Emad al Swealmeen, 32.

Detective Chief Inspector Andrew Meeks said: “Our investigations are ongoing, but at this time we firmly believe that the deceased is 32-year-old Emad al Swealmeen.”

He said Al Swealmeen is connected to the Rutland Avenue and Sutcliffe Street addresses, where searches are still ongoing.

Police believe he lived at the Sutcliffe Street address for some time and had recently rented the Rutland Avenue address.

“Our focus is the Rutland Avenue address, where we have continued to retrieve important items,” said DCI Meeks.

“We continue to appeal for any information on this incident and now that we have released his name, any information that the public may have about the Swealmeen, no matter how small, can be of great help to us.”

One person was killed and another injured in a car explosion outside Liverpool Women’s Hospital on Sunday.

Previously, the police carried out a controlled explosion as a precautionary measure in Sefton Park in the city as part of the investigation….