Home POLITICS Trump attacked a security agent and tried to drive to the Capitol:...
POLITICS

Trump attacked a security agent and tried to drive to the Capitol: Assistant 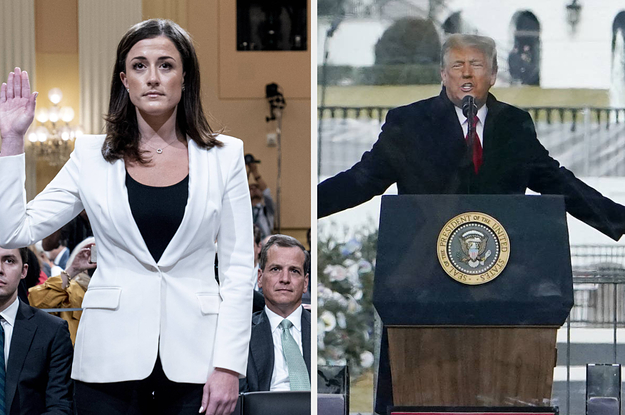 Hutchinson had previously been a central witness at behind-the-scenes hearings of the Select Committee to Investigate the January 6 Attack on the US Capitol, with excerpts of his testimony reproduced at recent public hearings. In a recorded statement, he detailed how Six House Republicans had called for blanket pardons. According to reports, he also said that he had witnessed the Meadows document burning after a meeting in the weeks after Election Day in 2020 and that Trump had reacted approvingly to the chants of the protesters on Capitol Hill who wanted to hang former Vice President Mike Pence.

In additional excerpts from those statements shown during Tuesday’s public hearing, Hutchinson described what was happening at the White House as rioters poured into Capitol Hill.

At one point, he went to the Meadows office to see what was being done and found his boss sitting on the couch checking his phone. “I just remember thinking at the time that Mark needs to get out of this and I don’t know how to get him out of this, but he needs to care,” Hutchinson said.

Minutes later, White House counsel Pat Cipollone came “speeding down the hall,” he said, telling Meadows that the rioters had arrived at the Capitol and that they needed to go talk to the president. Hutchinson said Meadows responded that the president “doesn’t want to do anything.”

“Pat said something to the effect of … ‘Mark, something has to be done or people are going to die and the blood is going to be on your fucking hands,'” Hutchinson said.

The two men then left to speak with the president.

In another clip from a statement, Hutchinson said she understood Trump wanted to include language about pardoning rioters in a Jan. 7 speech, but was dissuaded from doing so by White House lawyers.

Hutchinson also testified that both Meadows and Trump’s then-personal attorney, Rudy Giuliani, later sought pardons in connection with the events of January 6.

In a series of social media posts he had created after he was banned from Twitter over the events of January 6, Trump called Hutchinson’s story ‘untrue’ and said he hardly knew who she was.

Speaking Tuesday, Hutchinson said she was upset about the day’s events.

“I remember feeling frustrated, disappointed and really, it felt personal,” she said. “I was really sad. As an American, I was disgusted. It was unpatriotic. I wasn’t American. We were watching the Capitol building be defaced for a lie.”

“This is a very, very bad day for Trump,” Mulvaney wrote.

Hutchinson’s appearance at Tuesday’s public hearing was shrouded in intrigue, with the surprise hearing announced just 24 hours in advance. Previously, the committee had said it would not hold another public hearing until July.

“Over the past few days, the select committee has gotten new information about what’s going on in the White House,” Chairman Bennie Thompson said at the start of Tuesday’s hearing. “It’s important that the American people hear that information immediately.”

And therein lies an unhappy story about politics and the social safety net, and how difficult it is to strengthen it. When the American Rescue...
Read more
POLITICS

A Donald Trump supporter who assaulted police officers in the US Capitol riots with his teenage son in tow has been sentenced to more...
Read more
POLITICS

The White House announced that the Food and Drug Administration will investigate and propose the development of a standardized front-of-package food labeling system.Advocates say...
Read more

Cryptocurrency is the next phase in the evolution of money and has been making waves for over a decade, but not everyone seems to...
Read more

In one word: Bugs on new phones are something that has become a common problem for consumers. The iPhone 14...
Read more

World-renowned concussion expert Dr. Paul McCrory has been accused of 10 more cases of plagiarism, leading experts to question how much original research the...
Read more

Music taste may be influenced by personality traits, researchers say

Have you ever wondered why you love a particular song or genre of music? The answer may lie in your personality, although other...
Read more

The White House announced that the Food and Drug Administration will investigate and propose the development of a standardized front-of-package food labeling system.Advocates say...
Read more

Cryptocurrency is the next phase in the evolution of money and has been making waves for over a decade, but not everyone seems to...
Read more

In one word: Bugs on new phones are something that has become a common problem for consumers. The iPhone 14...
Read more