Home SCIENCE The corn belt will get hotter. Farmers will have to adapt.
SCIENCE

The corn belt will get hotter. Farmers will have to adapt. 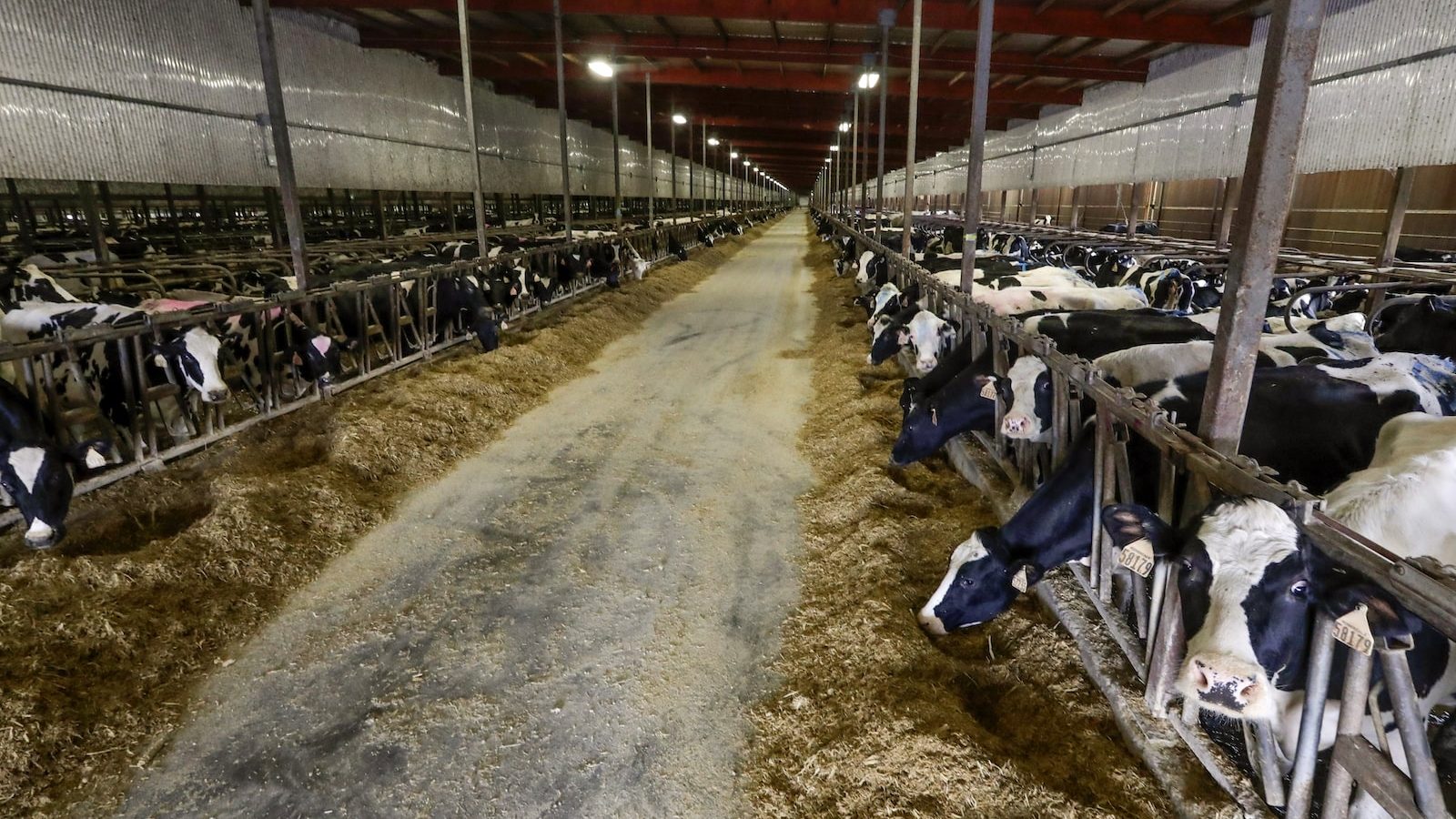 Corn on Zack Smith’s 1,200 acres is not his future. Smith, a fifth-generation farmer who works the land near Buffalo Center, Iowa, a city of nearly 900 people near the Minnesota border, knows the climate is changing and, in the future, it will be too hot and dry for a crop such as corn.

Researchers predict that by 2053, much of the Midwest will experience at least one day with temperatures of 125 degrees Fahrenheit or higher. According to the First Street Foundationa nonprofit climate change research group, Smith’s farm could one day be part of an “extreme heat belt,” a region that would include Kansas, Missouri, Iowa, Indiana, Illinois and Wisconsin.

Roughly the same region claims the name CORN Belt due to its corn production, estimated at 10 billion bushels each year. These impending high temperatures will change the economic and agricultural future of the region, and growers already see drops in corn production this year. Changes in the genetic makeup of maize have increased its drought resilience in recent years, but studies show that rising heat is attacking soil conditions and, in turn, corn yield.

The future of Corn Belt and Midwest agriculture will be increasingly warm, making each year more fragile and farmers and growers adapting to extreme weather conditions. Some states are even plant trees to protect livestock from the impending heat, which has been killing more and more animals every year. Farmers, growers and scientists are now testing new grains, crops and land management changes to prepare for the impending dangerous and destructive heat wave that is expected to build up in the center of the country.

As the corn industry prepares for these changes, Smith focuses on the stock harvestera technology it is developing to move away from corn production.

Quite simply, the Stock Cropper is an animal pen that moves on its own. Solar-powered, autonomous mobile barn animals move across a pasture, allowing them to eat and fertilize along the way. The process of slowly moving animals along a strip of land helps the soil retain nutrients, without the need for mowing or heavy machinery. Animals such as chickens, goats, lambs, or pigs are placed inside the approximately 24 foot long pen that ranges from 10 to 30 feet wide.

“It’s putting animals back on the land, but using the technology to our benefit,” Smith said.

Smith grew up on a pig farm in Iowa, but after a massive consolidation of the entire industry a few decades ago, his family started farming just corn and soybeans. Since the early 1990s, the Iowa hog population has raised by more than 50 percent, but individual farms raising hogs were down by 80 percent. The concentration of cattle has decimated individual farms and small communities throughout the Midwest, and farmers have been forced to go big or go.

After the hog bubble burst, Smith’s family found their land to be their most valuable asset and began growing more crops, just like other Iowan farmers. Iowa now produces the most corn of any state, and the United States is the world leader in corn production. Corn is used in countless ways, from food sweetener to alcohol distillation. The country’s massive corn export feeds both livestock and ethanol, which combined represent 63 percent of the country’s agricultural exports.

Smith sees the future of corn production as full of dry soils and predicts an imminent drop in corn commodity prices. Current corn prices are higher than they have been in recent years with experts they expect this to last for years to come, but growers are concerned that this year’s heat wave and drought have already hurt corn yields, with an estimated one billion bushels less harvested in Iowa and Nebraska.

Smith said he also sees the nation’s shift away from reliance on fossil fuels and ethanol as a losing battle for large Iowa corn farmers and is preparing for life after ethanol. Right now, more or less helped of the state’s corn production is used for ethanol.

“If that goes away, our model is going to look substantially different here,” Smith said.

While the Stock Cropper technology is a small part of Smith’s current operation, he said he wants to grow the technology to sell to other farmers. As corn becomes more difficult to grow, Smith envisions that a combination of selling the technology and high-quality protein, the aforementioned pigs and goats, rather than corn yields, will become the main source of food. income from him.

Smith said he still wants to grow corn sustainably, both for the land and to combat harsh future conditions. Currently, Smith uses sustainable practices such as strip tillagethe process of cultivating land with minimal soil disturbance and cover crops, planting vegetation that is not intended to be harvested to protect soil from erosion and improve conditions.

Corn, cereals and soybeans occupy a large part of the country’s agricultural area and are annual crops. Every year, money is invested in planting, cultivating, and harvesting these crops, only to do it all the following year. To combat this cycle, a new grain is growing in parts of the Corn Belt.

Kernza is domesticated wheatgrass that grows perennially and can be harvested for 10 to 20 years after being planted. It is often used as a substitute for cereals in the production of bread and beer. This perennial is cropping up in pockets of the corn belt and the Midwest, from Minnesota to Colorado.

Tim Crews, chief scientist of the institutes of the country, a nonprofit agricultural research group in Salina, Kansas, said there are no silver bullets to make current farming systems adapt to impending and destructive heat. Crews is part of a larger effort to move away from annual crops and plant more perennials like Kernza across the Perennial Agriculture Projectto make future crops more resistant to heat.

Kernza and other perennials such as legumes and oilseeds, a cousin of sunflowers, are more resistant to drought and heat due to their root structures. These crops have large root systems and can store and draw water from deep in the soil, unlike corn, which has a shorter root system. It does not hold much water, which causes agricultural runoff. This runoff has polluted rivers and lakes throughout the region, but in minnesota, Kernza is already being planted to prevent future contamination of the Mississippi River. Crews said the Land Institute’s work hopes to fix years of disruptive practices to prepare for an intense future.

“We became annual farmers who created an ecosystem that hardly exists anywhere else on the planet and is radically altered every year,” Crews said.

Perennials are also better for the environment because they don’t need heavy gas-powered equipment to operate every year, and they also require much less fertilizer and nitrogen per year. “It takes a lot of human labor or fossil fuels to bring those ecosystems back to square one every year,” Crews said.

But, Kernza and perennials are not without their challenges. These crops are in the early stages of domestication in the region and take years to develop and potentially replace crops such as maize. Also, Kernza roots can trap more water than corn and soybeans, but they need more water throughout the year as their growing period is longer than that of an annual crop. The teams said prolonged droughts, such as those lasting nine months or more, will complicate these crops, but perennials can thrive in recurring heavy rain events.

“If you have a deluge every other month, you’re good to go and annual systems are not going to work,” Crews said.

The Land Institute is working on developing new perennial grains that are combined with commonly used annual grains to ease the transition from annual to perennial across the board. The Kansas research organization has been testing perennial grass breeds of wheat, rice, sorghum, legumes and more. These perennial crops will take decades to plant in fields throughout the region, but they will allow the Corn Belt to adapt to a warmer climate and perhaps hang on to its corn-centric moniker.

“There are many other potential new crop species that could be much more drought-intensive or heat-tolerant than even any of the ones we’re working on right now,” Crews said.

The Functional Government Initiative (FGI), a watchdog group, is suing the Department of Homeland Security (DHS) and Customs and Border Protection (CBP) to...
Read more

Brian Kemp welcomed the ruling, saying it "exposes this legal effort for what it really is."
Read more
Load more

The storm hit Cuba as a strengthening hurricane on September 27 and then strengthened into a Category 4 hurricane as it crossed the Gulf...
Read more

Bill Clinton: ‘There is a limit’ to the number of immigrants the US can accept

But he criticized Governors Abbott and DeSantis for sending illegal immigrants to other states.
Read more

LaDeva Davis was a major presence on the Philadelphia dance scene, and dancing was just one of her talents.
Read more

The Functional Government Initiative (FGI), a watchdog group, is suing the Department of Homeland Security (DHS) and Customs and Border Protection (CBP) to...
Read more