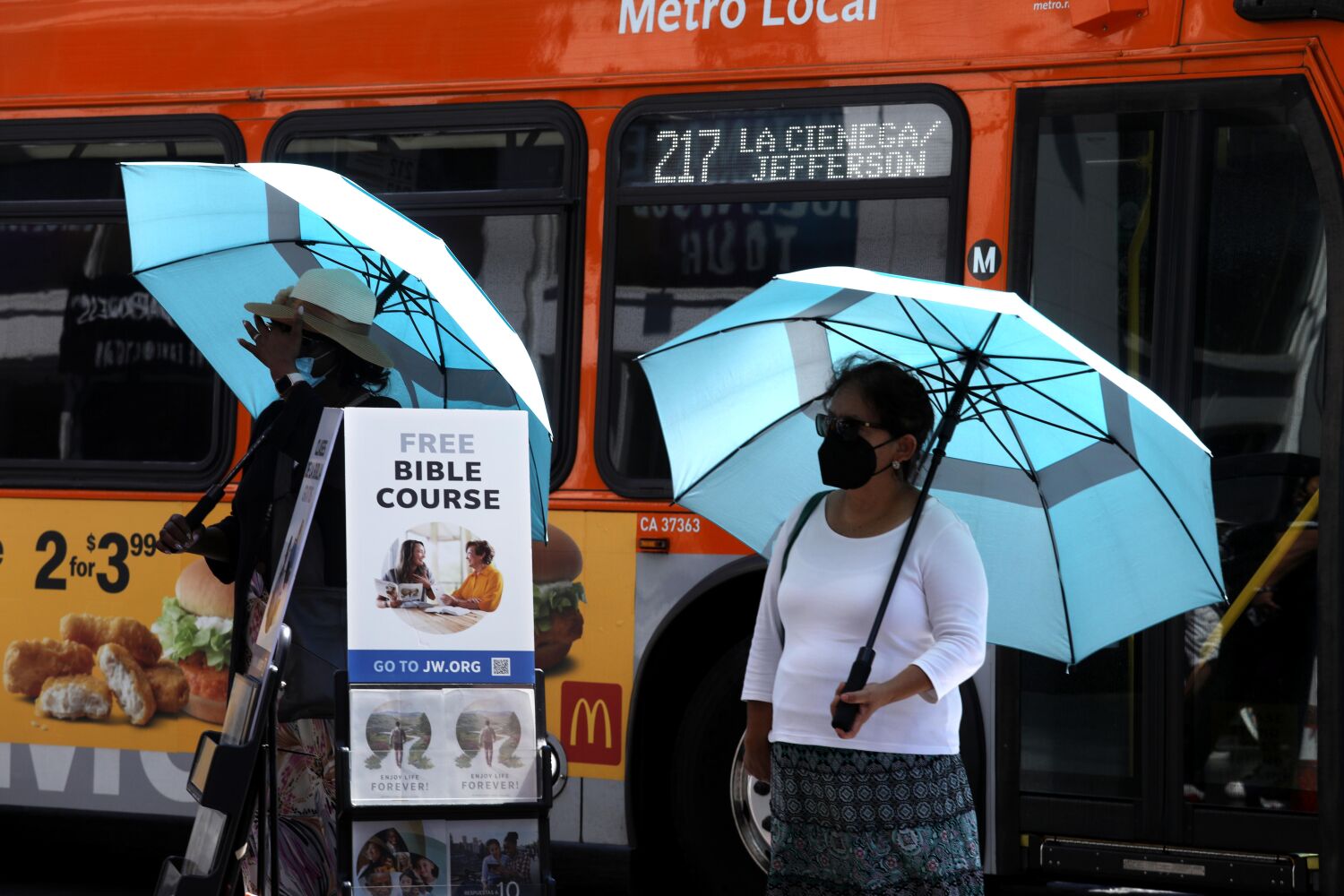 As officials in California and beyond try to assess how severe a fall and winter wave of coronavirus may be, a key factor is the growth of several new subvariants that are emerging.

It’s too early to tell if any of the newer variants will stand out in the way that Omicron and Delta did. None have been documented in significant numbers in California or the nation. Still, experts say another subvariant of superspreading, combined with more people being indoors when it’s cold, could bring new challenges.

“As we head into this coming fall and winter … we’re likely to see another variant emerge,” said Dr. Anthony Fauci, Biden’s top medical adviser for the pandemic, said in a recent virtual talk from the Center for Strategic and International Studies.

There is great expectation of an increase in COVID-19 cases this fall and winter. New York is already posting a rebound since hitting a seasonal low in early September.

For now, California remains calm, with cases and hospitalizations declining since mid-summer. But in Los Angeles County, weekly deaths remain elevated and well above spring lows, likely fueled by a case rate that, while improving, remains substantial.

“We are all braced for a spike in cases this fall. I think we’d like that to be minimal, and we think if more people can go ahead and protect themselves with the new bivalent boosters, that will really help everyone try to reduce the chance of seeing a big spike,” Los Angeles County said. . Said the director of Public Health, Bárbara Ferrer.

But officials can’t rule out the possibility of a severe wave, given the unpredictability of the coronavirus.

“It would be silly not to be prepared for uncertainty because we just saw a lot of uncertainty,” Ferrer said. “This is a coronavirus. It mutates a lot. We cannot change that reality. [But] we feel very optimistic. We have great tools.”

Following the distribution of COVID-19 vaccines, surges from the previous pandemic coincided with the emergence of new variants or sub-variants that were more transmissible and circumvented protections provided by previous vaccines or infections.

Such constant mutations make the coronavirus a moving target. So while officials are largely confident that California and the US are relatively well positioned for the colder months, thanks to ready supplies of vaccines, therapeutics, and the release of up-to-date booster shots, they continue to monitor the horizon.

Most of the problematic variants have concerned the use of letters from the Latin alphabet: Epsilon, Alpha, Delta and Omicron.

Omicron has dominated the world since last fall, and the current viral landscape is now marked by different sub-variants of that strain. They are not designated with Latin letters but with alphanumeric identifiers that have become more complex over time.

Among them is BA.2.75.2, which Fauci identified as “one that looks suspicious, which could start to evolve as a [troublesome] alternative.”

BA.2.75.2 has not been found widely in the US, and is not counted separately by the Centers for Disease Control and Prevention from the less worrisome but similarly named BA.2.75.

“The one that has worried us the most recently is BA.2.75.2,” said Dr. Benjamin Pinsky, director of the Laboratory of Clinical Virology at Stanford University.

At the Stanford lab, scientists have identified only one case of that subvariant, he said.

The concern with BA.2.75.2 is that our collective antibodies, whether they have received a previous vaccination or a previous case, may be less able to recognize this new subvariant and avoid infection.

Specifically, a preprint to study published in mid-September by scientists from Europe and Africa found that samples from random blood donors in Sweden were much less likely to recognize BA.2.75.2 compared to previous subvariants.

“Taken together, these data identify profound antibody escape by the emerging Omicron BA.2.75.2 sublineage, suggesting that it effectively evades the current [antibody] immunity in the population,” the report says.

dr Eric Topol, director of the Scripps Research Translational Institute in La Jolla, said two of the most concerning subvariants are BA.2.75.2 and BQ.1.1.

“They have already established themselves as the most extreme immune escape seen to date,” he said. And being more adept than BA.5, Omicron’s current dominant sub-variant, “isn’t a good thing.”

Immune escape means that “our immune system doesn’t see it very well because it has so many different mutations. So basically you have a workaround,” Topol said. “We haven’t seen this one before, so it has enough mutations to be able to get into us despite our immune response because our immune response has a blind spot.”

Another subvariant, BA.2.3.20, could be even worse because it has many mutations, although its level of immune escape has not been characterized, Topol said. And a fourth mutation worth looking out for is known as XBB.

What all of these newer subvariants have in common is that they “have a growth advantage,” Topol said.

UC San Francisco infectious disease expert Dr. Peter Chin-Hong is keeping an eye out for another subvariant, BF.7, also known as BA.5.2.1.7, which could be contributing to a significant portion of cases in Belgium and other European countries.

“It looks like BF.7 is having some legs right now,” Chin-Hong said. “The fact that this grandson [of the original Omicron strain] is increasing means that it is probably able to evade immunity because many people have already been infected in Europe” with BA.5.

None of these subvariants are circulating at high levels in the US, CDC data shows. And there is hope that updated bivalent boosters, specifically formulated to target BA.5 and another Omicron sub-variant, BA.4, will also provide additional protection against descendants of those sub-variants, such as BF.7 and BA.4.6.

But what’s concerning about other strains that have a high level of immune escape, including BA.2.75.2, is that they could start a new wave and potentially re-infect people who have even recently recovered, something that happened this summer. when BA.5 supplanted BA.2.12.1.

“What we have learned during Omicron is that vaccinated people can also die if they don’t get boosters,” Chin-Hong said. “And it’s disproportionately affecting older people.”

If a subvariant emerges that “is really immune evasive, it means that more people will get infected because our ‘force field’, in general, as a community will be broken. And as more people get infected, older people will find it easier to get infected, and so that infection in them, if not potentiated, could lead to serious illness.

“I think hospitals should be on their guard,” he added.

People at lower risk of severe COVID-19, those with some immunity through vaccination or previous infection, are less likely to experience severe illness or death. Even if they become infected, other parts of the immune system that take longer to kick into gear and continue to function regardless of the subvariant are expected to respond and reduce the risk of severe disease.

A grim scenario would be the worst features of the new subvariants combining to form another new version.

“One of the questions people have is recombination: so you can mix and match the best features of one with the other. And at some point, randomly, you will get something that has the immune evasion of BA.2.75.2, for example, and the transmissibility of BF.7,” Chin-Hong said.

For those most at risk, COVID-19 is still causing hospitalizations and deaths, especially among people who are not up to date on their vaccinations. Since August, approximately 350 to 500 Americans have died daily from COVID-19, which, if extrapolated over a year, would result in four to five times the annual number of influenza deaths in a year average.

“It’s a level of suffering and death that we don’t accept as ‘living with COVID,'” said Dr. Ashish Jha, White House COVID-19 response coordinator, said Tuesday at a forum at the Center for Strategic and International Studies.

In the San Francisco Bay Area, which has never been hit harder by the pandemic compared to Los Angeles County, some experts suggest the era of local mask mandates is over.

But in Los Angeles County, health officials, while optimistic this winter could be better, say they must be prepared for a scenario where booster shots are less helpful than anticipated due to new subvariants.

As a result, the Los Angeles County Department of Public Health has not ruled out re-implementing mandatory mask mandates if hospital conditions become critical.

If “we’re in a situation where there are threats to the health system and we’re surrounded by people getting seriously ill… I think people will go ahead and deliver,” Ferrer said. “These are sensitive public health precautions.”

She suspected that if hospitals were overloaded again, health officials in other parts of California would reevaluate safety measures. Los Angeles County health officials were the first to reinstate a mask mandate in response to the growing Delta variant last summer. Other local governments and states took that approach in the weeks and months that followed as more threats emerged, including Omicron.

“We are also realistic enough to know that there is always a place for rules to ensure that the collective good can actually be realized,” Ferrer said.

Nuclear reactor from our friendly neighborhood

At St. Michael the Archangel School, students like me were rarely reminded that a nuclear reactor was humming nearby. But we had regular...
Read more

The discount data that some universities will not publish

By now, many college shoppers have gotten the message that not everyone pays list price. But what percentage gets any kind of discount,...
Read more