Home SPORTS Novak Djokovic Says He Has No Regrets About Vaccine Stance After US...
SPORTS

Novak Djokovic Says He Has No Regrets About Vaccine Stance After US Open: ‘I Knew What The Consequences Would Be’ 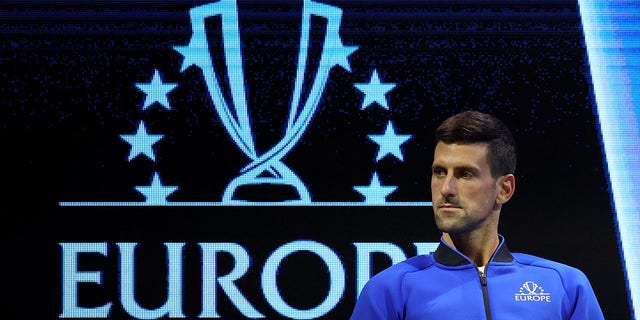 Novak Djokovic’s inability to participate in the US Open Coming in earlier this month, due to his vaccination status, it’s not something the 21-time Grand Slam champion will regret, even if it means more time between tournaments and a drop in rankings.

Djokovic stood by his decision not to get vaccinated against COVID-19, during a press conference on Thursday. before the Laver Cup in Londonsaying that he had been well aware of the consequences.

Team Europe’s Novak Djokovic looks on during day one of the Laver Cup at The O2 Arena on September 23, 2022 in London, England.
(Luke Walker/Getty Images for Laver Cup)

“I don’t regret anything. I mean, I feel sad that I couldn’t play (at the US Open), but that was a decision I made, and I knew what the consequences would be,” he said Thursday. “So I accepted them, and that’s it.”

Federal travel restrictions prevented Djokovic from entering the US as non-citizens must be vaccinated against COVID in order to enter.

The United States Tennis Association (USTA) provided a statement over the summer announcing that while the tournament does not have a vaccination mandate, it will adhere to federal policy.

“I’m not used to doing, obviously in the last 15 to 20 years, longer breaks between tournaments, but it is what it is,” Djokovic added. “That’s the situation I was in. I’m excited to be able to play here now, and most of the other indoor (tournaments) for the rest of the season.”

Djokovic was deported from Australia in January after traveling there on a medically exempt visa for the first Grand Slam tournament of the year. Although he was able to compete in the French Open and subsequently won Wimbledon, he is currently ranked No. 7 in the world, in part because no ranking points were awarded at the All England Club due to the ban on Russian and Belarusian athletes.

Djokovic faces a three-year suspension as a result of his deportation, but it’s not a matter he’s given much thought to, despite hoping for the best.

“It’s not really in my hands right now,” he said Thursday. “So I hope to get some positive news.”

The Australian Open It has been one of Djokovic’s most successful performances: he has won a record nine titles. He said in May that he doesn’t hold “any hard feelings” over the incident and that if he had the chance, “I’d love to come back.”

Associated Press contributed to this report.

Paulina Dedaj is a digital reporter for Fox News and Fox Business. Follow Paulina Dedaj on Twitter at @PaulinaDedaj. If you have a tip, you can email Paulina at Paulina.Dedaj@fox.com

Campaign signs may be old school, but they can pack a punch: NPR

Government shutdown fears calmed this week as Congress played its annual kick-the-funding-can game before lawmakers headed out of town to campaign to save their...
Read more

In his speech, Putin not only claimed that elementary school boys are being offered gender reassignment surgery, but declared that the United States was...
Read more

follow the nation Get email updates Sign up for our free daily newsletter, along with occasional offers from shows that support our journalism. By signing...
Read more
Load more

‘Once in a lifetime’ comet image wins award

Disconnect Event Won Astrophotography of the Year AwardA rare photograph of a comet that will never be seen from Earth again has won a...
Read more

Book review: ‘The Divider’ is a sober look at the Trump White House

If "The Divider" has a dominant theme, it may be the fight inside the "almost cartoonishly chaotic White House" by people more reasonable...
Read more

Campaign signs may be old school, but they can pack a punch: NPR

Government shutdown fears calmed this week as Congress played its annual kick-the-funding-can game before lawmakers headed out of town to campaign to save their...
Read more

In his speech, Putin not only claimed that elementary school boys are being offered gender reassignment surgery, but declared that the United States was...
Read more