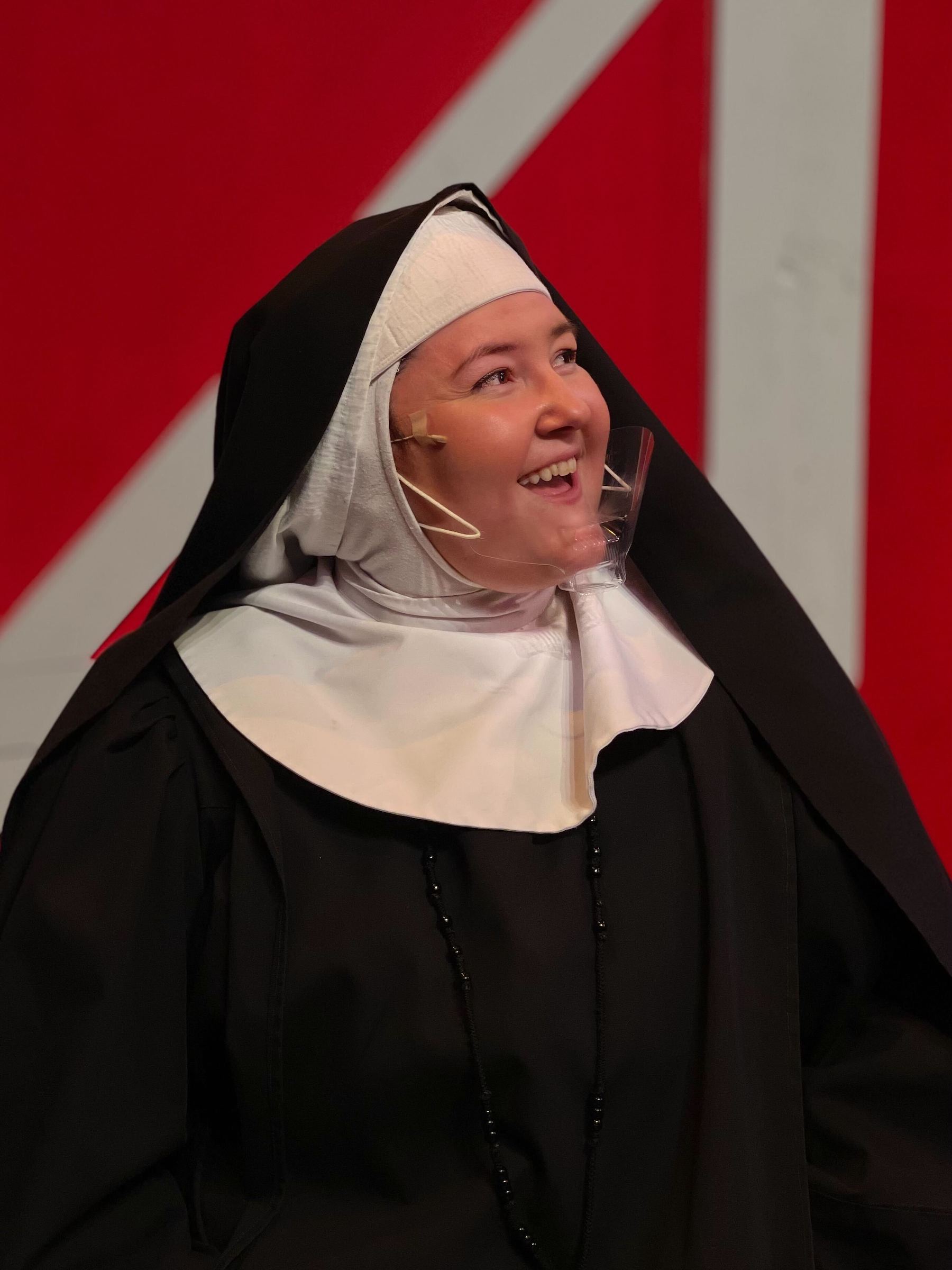 MISSOULA, Mont. – There was something a little different on stage at a recent performance of the musical “Sister Amnesia’s Country Western Nunsense Jamboree,” the Missoula Community Theater’s first production since the start of the pandemic.

All the actors wore transparent masks. That way, the audience was better able to see the actors’ expressions, which is “a big problem in live theater,” said Jess Heuermann, who played Sister Mary Wilhelm on the show.

Theater companies and musical ensembles looking to resume live performances are coming up with creative ways to ensure the show runs safely, particularly in states that prohibit venues from imposing vaccine or mask requirements.

In states without such bans, productions may require vaccine testing for cast, crew, administrative staff, and audience members to protect against transmission of the virus that causes COVID-19. That’s what all 41 Broadway theaters in New York City have done.

Other artists and venues are taking additional steps. The Chicago Symphony, for example, now limits performances to 90 minutes or less, with no intermission. A Rock Hall, Maryland venue left the front row of seats empty, in addition to requiring masks and proof of vaccination, for a recent musical performance.

But raising the curtain has been more difficult in states like Montana, Florida and Texas, where the politicization of public health measures has found its way into theaters.

Florida and Montana prohibit state and local governments from requiring masks, but businesses and private entities can. Montana prohibits both private employers and government entities from “discrimination based on vaccine status.” Florida Governor Ron DeSantis prohibited businesses to require customers to prove that they have been vaccinated against COVID. In October, the governor of Texas. Greg abbott private employers prohibited to issue covid vaccination mandates.

Some big-name artists are canceling shows because of vaccine or mask bans. Singer Michael Bublé, for example, canceled a September show in Austin because the University of Texas arena said it couldn’t impose a vaccination requirement on audience members. University officials said they trusted their health and safety protocols.

Country singer Travis Tritt took the opposite stance. He canceled a series of shows at venues mandating masks and vaccinations or “pushing test protocols on my fans.”

Local companies and artists that had been on a pandemic hiatus cannot afford that luxury. They must work with, or around, the rules of their state if they want to work.

A survey by advocacy group Americans for the Arts found that 99% of nonprofit arts groups canceled events during the pandemic, equivalent to 557 million tickets lost through July.

Although some losses have been offset by federal aid, most arts groups and artists are reporting significant financial losses.

In Montana, the Missoula Community Theater has reduced its capacity and eliminated assigned seating, allowing patrons to be separated while still sitting next to their “bubble” of friends and family for performances. Some people who had lowered their masks after taking their seats raised them again after an announcement just before the performance began that it was mandatory.

“People came to the theater tonight because they know the theater is trying to keep everyone safe,” said Paula Jones, a retired nurse who attended.

But some theater operators seem eager to scare potential customers with such rules. For example, the recently renovated Alberta Bair Theater in Billings, Montana, which has a normal capacity of 1,376, recommends patrons to wear masks, but does not require them.

In Florida, nine theaters in Sarasota, along with others in Miami and Tampa, came together to create a uniform set of requirements for theater goers to circumvent that state’s ban on vaccine mandates. Audience members must show proof of vaccination or proof of a negative covid test taken less than 72 hours prior to any performance.

Some people have complained about the policy to the Florida Department of Health, which can impose a daily fine of $ 5,000 on those who violate the state’s vaccine passport ban. Department officials have not acted on those complaints, but a small Sarasota theater canceled a show scheduled for November, saying it feared the owners of the small operation would not be able to pay any fines.

Theater owners are also finding that a small percentage of people will resist their skin commands, even after multiple reminders. If they try to impose a covid security measure that is not prohibited by state law, people who oppose the rules will ignore it.

“It’s like playing whack-a-mole,” said Rebecca Hopkins, general manager of the Florida Studio Theater in Sarasota. “As soon as you get away from some people, the masks come down. We have had to tell people that ‘we have asked them three times politely that we demand masks and that if they cannot comply, they will have to leave.’

In Utah, the 360 ​​singers from the Tabernacle Choir on Temple Square in Salt Lake City are vaccinated, along with the orchestra and anyone else entering the rehearsal and performance space. A handful of singers refused the vaccines and were fired, according to choir chairman Michael Leavitt, the former Republican governor of Utah and President George W. Bush’s secretary of Health and Human Services.

In addition, each member of the choir is tested for covid before each rehearsal and performance. Artists are instructed to stay home if they experience potential covid symptoms, including sneezing. However, the choir dropped a mask mandate for the singers during rehearsals after complaints that the voices were being muffled. Masks are still required when the choir is not singing.

Members of the orchestra have the option of removing their masks while performing if they feel that a mask inhibits their performance.

Most importantly, Leavitt said, the choir, which has not yet scheduled its first performance before an audience, is prepared to withdraw rehearsals and performances if things go wrong. He has not set rules for the audience when the performances begin. Some state lawmakers have proposed blocking vaccine mandates.

“I have used the analogy of walking towards a freshly frozen lake. Take one step at a time. Listen to the creaks and if we don’t hear any, we’ll move on. If we do, we will run back to shore, ”Leavitt said.

Since covid, action groups increasingly rely on members with medical backgrounds for advice on how to act safely. That person from the Atlanta Symphony Orchestra is Dr. Susan Ray, a hospital epidemiologist and soprano with the orchestra choir.

Orchestra members now wear masks for both rehearsals and concerts. The choir is masked for rehearsals and plans to do so for their first concert with the symphony in December. Newly appointed conductor Nathalie Stutzmann does not wear a mask to better communicate with orchestra members, but is tested daily for covid.

Ray is confident that the orchestra is taking all the right steps to protect the choir’s audience, including requiring audience members to show proof of vaccination or negative covid test. “But I’m still nervous,” Ray said. “We have a lot of gray-haired choir members, and not all of them are nice and skinny.”

People 65 and older are among those most likely to experience serious medical problems from covid, and obesity increases the risk.

Researchers from the University of Colorado-Boulder and the University of Maryland recently advised While masks reduce droplet flow for both singers and players, the quality of the filter material and fit are key components of effectiveness.

They also found that the longer the musicians play and sing together, the greater the risk. They recommend breaks after rehearsing or performing for 30 minutes indoors and 60 minutes outdoors. And they also suggest leaving several feet of distance between musical instrument players and singers to reduce “aerosol flow.”

“I want to acknowledge the courage of the music directors and teachers to go ahead and follow our suggestions in the face of all this adversity, fear and worry,” said Shelly Miller, study co-author and professor of mechanics. and environmental engineering in Colorado-Boulder.

The Centers for Disease Control and Prevention says that more than 15 minutes of exposure in a confined space with poor ventilation where a contagious person is screaming, singing or exercising can increase the risk of transmitting the virus.

Some college students hoping to prepare for future arts employment worried that classes and performances canceled due to COVID could limit their future opportunities.

Lauren Bergen, 22, a theater student at Wagner College in Staten Island, New York, was so concerned that she took the 2020-21 academic year off due to “so much potential for things to go wrong.”

Now, she has returned to performing in Wagner College theater productions, and the school follows the same safety protocols required for Broadway shows.

Bergen’s first show of the fall semester was “Small Mouth Sounds,” a play chosen, in part, because it required the actors to be “mostly silent,” according to Felicia Ruff, a drama professor at Wagner College.

“We have a great strategy in selecting shows that can be done safely,” Ruff said.

Submit a tip for the story