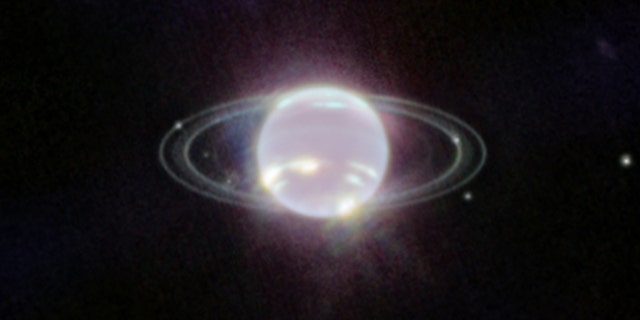 The James Webb Space Telescope has captured Neptune in a whole new light.

Some of the planet’s rings have not been detected since NASA’s Voyager 2 flyby in 1989, the first spacecraft to observe Neptune.

IN THE CLOSEST APPROACH TO EARTH IN 59 YEARS, JUPITER WILL REACH OPPOSITION

Webb’s near-infrared camera takes images of objects in the near-infrared range from 0.6 to 5 microns, so Neptune does not appear blue to Webb. In fact, methane gas absorbs red and infrared light so strongly that the planet is quite dark at these near-infrared wavelengths, except where there are high-altitude clouds. These methane ice clouds stand out as bright streaks and dots, reflecting sunlight before it is absorbed by methane gas.
(Credits: NASA, ESA, CSA, STScI)

Neptune, which orbits in the remote and dark region of the outer solar system, is characterized as an ice giant due to the chemical composition of its interior.

In visible light, it appears blue due to trace amounts of methane gas in its atmosphere, but Neptune does not appear blue to Webb’s near-infrared camera.

“In fact, methane gas absorbs red and infrared light so strongly that the planet is quite dark at these near-infrared wavelengths, except where there are high-altitude clouds. These methane ice clouds are prominent as streaks and bright spots, which reflect sunlight before it is absorbed by methane gas,” NASA explained.

Also, a thin line of brightness around the planet’s equator could be a signature of the global atmospheric circulation, driving Neptune’s winds and storms.

Webb’s images also show an “intriguing glow” at the north pole and the first indication of high-latitude clouds surrounding a vortex at the south pole.

The telescope also caught a glimpse of Neptune’s 14 known moons, including a bright point of light that is the large and unusual moon of Triton.

Because Triton is covered in frozen, condensed nitrogen, it reflects 70% of the sunlight that hits it.

Julia Musto is a reporter for Fox News Digital. You can find her on Twitter at @JuliaElenaMusto.

Some Democrats, including climate hawks, had voiced support for the permit package because they said it would help speed construction of transmission lines and...
Read more