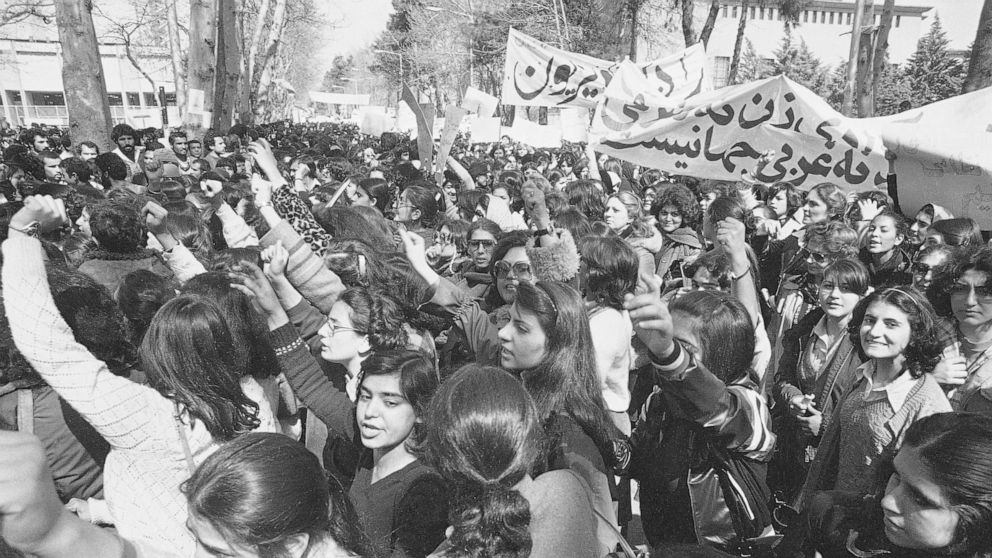 A young woman climbs onto the roof of a car in the middle of Mashhad, a conservative Iranian city famous for its Islamic shrines. She takes off her scarf and starts yelling “Death to the dictator!”. Nearby protesters join in and cars honk their horns in support.

For many Iranian women, it’s an image that would have been unthinkable just a decade ago, said Fatemeh Shams, who grew up in Mashhad.

“When you see the women of Mashhad taking to the streets and publicly burning their veils, this is really a revolutionary change. Iranian women are ending a veiled society and mandatory veiling,” she said.

Iran has seen multiple eruptions of protests in recent years, many of them fueled by anger over economic hardship. But the new wave is showing fury against something that lies at the heart of the identity of Iran’s cleric-led state: the mandatory veil.

The Islamic Republic of Iran requires women to cover themselves in public, which includes wearing a “hijab” or a headscarf that is supposed to completely hide the hair. Many Iranian women, especially in major cities, have long played a cat-and-mouse game with the authorities, with the younger generation wearing loose scarves and outfits that push the boundaries of conservative dress.

That game can end in tragedy. A 22-year-old woman, Mahsa Amini, was arrested by morality police in the capital Tehran and died in custody. Her death sparked nearly two weeks of widespread unrest that spread across Iran’s provinces and brought students, middle-class professionals and working-class men and women onto the streets.

Iranian state television has suggested that at least 41 protesters and policemen have been killed. An Associated Press count of official statements by authorities put at least 13 dead, with more than 1,400 protesters arrested.

A young woman in Tehran, who said she had continuously participated in last week’s protests in the capital city, said the violent response by security forces had greatly reduced the size of the demonstrations.

“People still take to the streets to find a meter of space to shout their anger, but they are immediately persecuted, beaten and violently detained, so they try to mobilize in groups of four or five people and once they find an opportunity they run. together and start manifesting,” he said, speaking on condition of anonymity.

“The most important protest they (Iranian women) are doing right now is taking off their scarves and burning them,” she added. “This is a women’s movement first and foremost, and men are supporting them from the rear.”

A writer and rights activist since her student days at the University of Tehran, Shams participated in the massive anti-government protests of 2009 before having to flee Iran.

But this time it’s different, he said.

Waves of violent repression against protests over the past 13 years “have disillusioned the traditional classes of society” that were once the backbone of the Islamic Republic, said Shams, who now lives in the United States.

The fact that there have been protests in conservative cities like Mashhad or Qom, the historic center of Iran’s clergy, is unprecedented, he said.

“Every morning I wake up and think, is this really happening? Women making bonfires with veils?

Modern Iranian history has been full of unexpected twists and turns.

Iranian women who grew up before the monarchy was overthrown in 1979 remember a country where women were largely free to choose how they dressed.

People of all persuasions, from leftists to religious hardliners, participated in the revolution led by the shah. But in the end, it was Ayatollah Ruhollah Khomeini and his followers who ended up seizing power and creating an Islamic state led by Shia clerics.

On March 7, 1979, Khomeini announced that all women must wear a hijab. The next day, International Women’s Day, tens of thousands of unveiled women marched in protest.

“It was really the first counterrevolutionary movement,” said Susan Maybud, who participated in those marches and then worked as a news assistant for the foreign press. “It wasn’t just about the hijab, because we knew what was coming next, taking women’s rights away.” She didn’t even have a hijab at the time, she recalled.

“What you are seeing today is not something that just happened. There has been a long history of women protesting and challenging authority” in Iran.

The hijab has been “the lightning rod of the opposition,” explained Roham Alvandi, an Iranian historian and associate professor at the London School of Economics and Political Science.

“It represents the Islamic Republic’s ability to reach out and control the most private and intimate aspects of Iranians’ lives,” he said.

A century or more ago, strict veiling was largely confined to the upper classes of Iran. Most of the women lived in rural areas and worked, “so hijab wasn’t exactly possible for them,” said Esha Momeni, an Iranian activist and academic affiliated with the UCLA Department of Gender Studies.

Many women wore a “roosari” or casual headscarf that was “part of the traditional dress rather than having a very religious significance”.

Throughout the late 19th century, women were front and center in street protests, she said. In Iran’s first democratic uprising of 1905, many towns and cities formed local women’s rights committees.

This was followed by a period of top-down secularizing reforms under military officer-turned-king Reza Shah, who banned the wearing of the veil in public in the 1930s.

During the Islamic Revolution, women’s hijab became an important political symbol of the country “entering this new Islamic era,” Momeni said. Growing up in Tehran, she recalls “living between two worlds” where family and friends did not wear the veil in private gatherings but feared harassment or arrest by police or pro-government militias in public.

In 2008, Momeni was arrested and held in solitary confinement for a month in Tehran’s notorious Evin Prison, after working on a documentary about women activists and the 1 Million Signatures Campaign which aimed to reform discriminatory laws against women. women. She was later released and joined the 2009 “Green Movement” protests.

Like Shams, he sees today’s wave of protests as shaking the foundations of the Islamic Republic.

“People have finished hoping for internal reform. People who don’t want the hijab is a sign that they want the system to fundamentally change,” Momeni said.

The 2009 protests were spearheaded by Iran’s “reformist” movement which called for a gradual opening up of Iranian society. But none of Iran’s political parties, not even the most progressive ones, led by reformists, supported the abolition of the compulsory veil.

Shams, who grew up in a relatively religious family and sometimes wore a hijab, recounted how during the 2009 protests she publicly renounced the veil. She found herself under attack from the pro-government media, but also shunned by figures in the reform movement and the family of her then-husband.

“The main reason for our divorce was compulsory hijab,” she said.

As Iran has been defeated by US sanctions and various waves of protests fueled by economic grievances, the leadership has become insular and uncompromising.

In the 2021 presidential election, all serious contenders were disqualified to allow Ebrahim Raisi, a protégé of Supreme Leader Ali Khamenei, to assume the presidency despite record low voter turnout.

The death of Mahsa Amini, who came from a relatively impoverished Kurdish area, has sparked anger over forms of ethnic and social discrimination, as well as gender, Shams said.

From Tehran’s universities to remote Kurdish cities, protesting men and women have chanted: “Whoever kills our sister, we will kill him.”

Shams says Iran’s rulers have backed into a corner, where they fear giving in to the veil could endanger the 44-year-old Islamic Republic.

“There is no going back, at this point. If the Islamic Republic wants to stay in power, it has to abolish the compulsory veil, but to do so it has to transform its political ideology,” he said. “And the Islamic government is not ready for that change.”

The Census Bureau released its 2021 income report Tuesday, and the political twist is that unprecedented pandemic transfer payments lifted millions out of poverty....
Read more

An Internet truism, central to the work of researchers who study the spread of dangerous trends and misinformation, holds that trying to discourage bad...
Read more

This week, The New Yorker will announce the shortlists for the 2022 National Book Awards. Check back this afternoon for the Literature in Translation...
Read more