Home SPORTS 'Increasing the audience for rugby': PR7s seek to seed the game in...
SPORTS

‘Increasing the audience for rugby’: PR7s seek to seed the game in the United States | rugby sevens 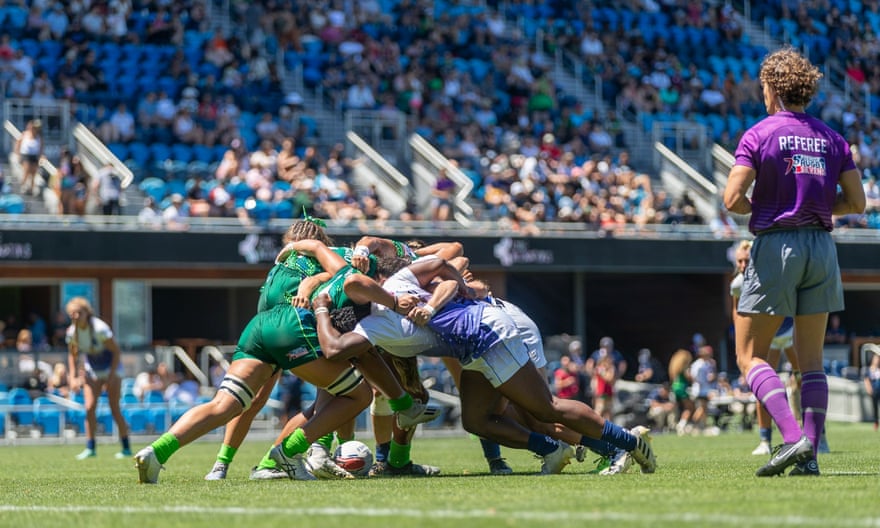 meIn May, World Rugby announced that the USA will host the men’s Rugby World Cup in 2031 and the women’s two years later. The news started the clock on a decade-long project to establish rugby as an American sport.

Four months later, on the eve of the Women’s World Cup in New Zealand, to say that all is not well in American rugby would be like saying that all is not dry in the ocean.

At 15, the men’s Eagles have yet to qualify for France 2023 while the women’s beat scotland in a World Cup warm-up, but then shipped 52 points to England. At home, Major League Rugby, the men’s professional league, faces uncertainty over teams from Los Angeles and Austin, both disqualified amid a board-level dispute last season. MLR champions Rugby New York have parted ways with coach Marty Veale.

In Sevens, the World Cup in South Africa last week produced a disappointing result for the US men, who finished 11th, although the women placed fourth.

Talk to Owen Scannell, though, and the can-do spirit abounds. Dartmouth College player who worked for the New England Free Jacks in MLR, he is now head of his own startup, Premier Rugby Sevens.

PR7s is a professional competition in which men and women compete in a series of tournaments for the same final trophy. After a pilot event in Memphis in 2021, San Jose, Washington DC and Austin hosted events this summer. Scannell declares himself “really happy” with how everything turned out.

“From an in-person audience to what we had from a broadcast audience, a lot of what we’ve been doing is about growing the audience for rugby. I think we’re starting to see that really happen.”

Game-day crowds, says Scannell, were “a couple of thousand at each event.” At Audi Field in DC or PayPal Park in San Jose, the PR7s faced the same problem as MLR at Red Bull Arena in New Jersey for their June finale: how to make a small crowd look good on TV.

The simple way, as MLR showed for New York’s win over Seattle, is to get everyone in front of the camera. But in San Jose, for a one-day event, Scannell couldn’t do that.

“The far sideline seats are all in the sun. So everyone bakes for the first six hours of the day and no one wants to sit there. But you can’t put the camera on the other side because of the radio frequency with the airport. So there is no real way to photograph it to make it look good.

“But if you were in the stadium, the atmosphere was great. We had the DJ, we had music, inflatables, a great bar area at one end of the pitch, and kids playing with rugby balls on a little patch of grass. The atmosphere of the festival was phenomenal.”

And according to the seven in the whole world. The shorthand game originated in the Scottish Borders. 140 years ago Like an end-of-season jamboree, tournaments from morning to night, endurance is part of the challenge.

Scannell says the PR7s can endure, particularly as a rare rugby property looking to treat men and women equally.

“One of the best things we saw this year was a lot of men’s and women’s teams committing to each other and saying, ‘Hey, you’re a headliner, I’m a headliner. We are friends, we are competing to win.”

There are four teams in each PR7 draw, named generically and not by location given the nature of the project, a traveling show from town to town. This summer, the Headliners outperformed the Loggerheads, Loonies, and Experts. The champions were led on the women’s side by American Olympian Abby Gustaitis and New Zealander Grace Kukutai. devin short other brady feverSon of the great Eric Rush and All Blacks Sevens player, he led the Headliners men.

Scannel says, “When the female Headliners won DC, all the male Headliners ran onto the field to join them in celebrating. It was a great time for fairness in sports.”

It also explains how PR7 athletes are paid.

“PR7s have equal levels of pay and prize money allocated between male and female players based on previous professional experience and history, and an equal aggregate amount of compensation between the male and female programs.

“Equity between our male and female athletes has been at the core of our competition and company well beyond salary.”

men the fractured landscape of American rugby, few things are simple. American Olympians including Perry Baker (two-time World Player of the Year) and Alev Kelter played PR7 in 2021, but this year they focused on the World Series and World Cups.

The question of how PR7s should help US national teams is just as complicated as the question of whether MLRs exist to strengthen the men’s Eagles XV. (Some in MLR think, as a private company, It is not like this.)

“There are a lot of discussions and things we can do to make sure that we are aligning with the global Sevens circuit and that we are really additive to the broader ecosystem of rugby and Sevens around the world. That would probably be one of the most important work points for us.”

He also points to the players who have won caps in the US after the PR7s, “Aaron Cummings other D’Montae Noble on the men’s side and Sarah Levy in that of women”, and says that everything is No pessimism on the Eagles Sevens, given that “the women finished fourth in Cape Town, in the medal rounds, which is where we want to be”.

Another complicating factor in the lives of PR7s has yet to come to pass: what happens if MLRs decide to try their luck. Theoretically, MLR sevens would give the likes of the Houston SaberCats and Free Jacks, with their own stadiums, a chance to make some money.

Scannell says: “We have had a very positive working relationship with Major League Rugby, from players participating in both competitions to working collaboratively to promote events in the Austin and DC markets with Gilgronis and Old Glory.

“We look forward to continuing to work with them collaboratively to grow the profile of rugby in the United States, to find more fans in a positive and constructive way.”

Share
Facebook
Twitter
Pinterest
WhatsApp
Previous article‘The People’s Joker’: A New Take on the Batverse You May Never See
Next articleDustin May looks like the old man, he’s unhittable in five innings as the Dodgers shut out the Giants
RELATED ARTICLES
SPORTS

Bill Hader wore a mask to the Emmys, gets praise

The stars came out and took off their masks at Sunday's 74th Primetime Emmy Awards. Well, not all masks: Bill Hader wore a black...
Read more

manifest has returned from the dead with the first trailer for its fourth and final season, this time with Netflix. The...
Read more