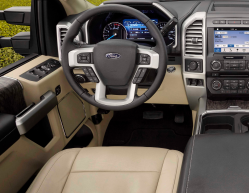 September 26, 2021 – A Ford “deadly wobble” lawsuit was dismissed in part after owners of the F-250 and F-350 pickup trucks alleged violent tremors occurred while driving.

The class action lawsuit alleges that the wobble causes drivers to lose control of the trucks due to problems with the shock mounts, ball joints, control arms, shocks, struts, and track bar bushings.

The plaintiffs then filed a consolidated amended lawsuit that caused Ford to file another motion to dismiss.

Of the previous plaintiffs, one survived, and is now joined by 13 new plaintiffs from 10 states asserting 36 claims on F-250 and F-350 trucks.

According to Ford’s “deadly wobble” lawsuit, trucks jerk violently when they hit potholes or ruts in the roads when driving over 50 mph, but slowing the trucks stops the wobbles. The class action lawsuit alleges that more than 1,000 Ford “death wobble” complaints have been filed with the government between 2005 and 2019.

Ford allegedly violates two express warranties provided to truck owners, but the automaker argues that no breach of warranties occurred because no plaintiff alleges that a Ford dealer denied them a free repair. Furthermore, no claimant experienced multiple unsuccessful attempts at repair when the warranties were applied.

The judge dismissed the claims because a plaintiff who had the truck repaired has never complained that the “wobble of death” has reoccurred since the repairs were made.

And while the plaintiff says they “are terrified that the new steering damper is just a temporary corrective measure for the Death Wobble,” the judge says the plaintiff has no evidence of that belief.

Another plaintiff had his express warranty claim dismissed because his truck hasn’t had a problem since Ford made the repairs.

Other claims against Ford were dismissed because the warranties had already expired when the owners brought the trucks to the dealerships.

The judge ruled at this stage that he cannot determine whether a nationwide class can be held in this case, so Ford’s motion to dismiss the claim is dismissed, for now.

The judge also dismissed certain claims based on fraud and allowed others to move forward at this stage of the lawsuit.

The plaintiff is represented by McCune Wright Arevalo and Sohn & Associates.