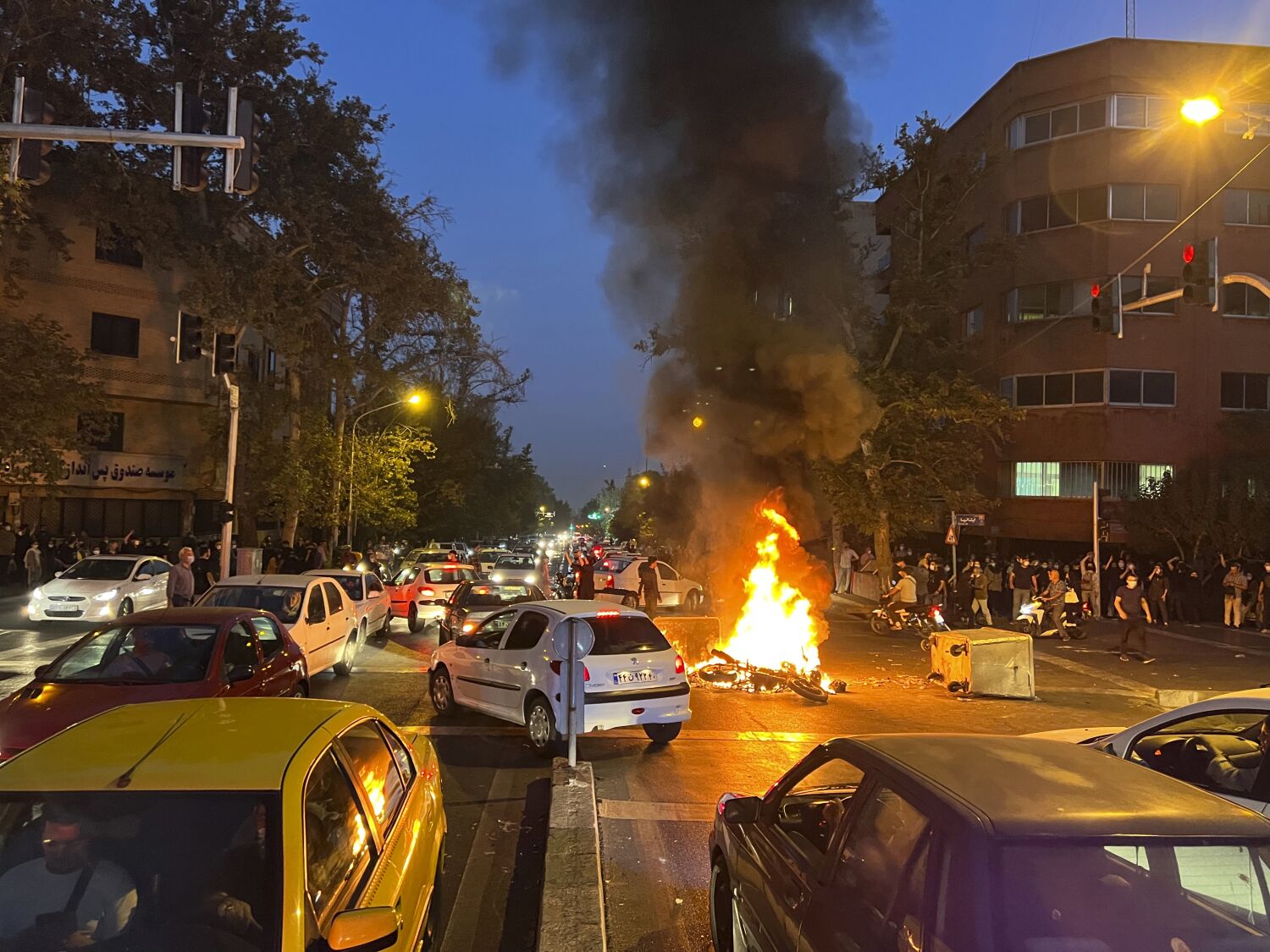 Iran’s anti-government protests, which were sparked by the death of a young woman in police custody, have gone viral, and then some.

The Internet is an essential tool for these protesters. For more than a week, millions have shared harrowing videos and vivid images online of clashes between protesters and Iranian authorities.

They have topped news broadcasts and bounced around the world.

Tehran’s hardline government deployed digital tracers and waged an all-out media war against protesters and their supporters, a strategy it used in 2019 to quell protests in just three days. Back then, the authorities took control of the Internet and unleashed a violent crackdown that resulted in thousands of arrests and up to 1,500 deaths.

This time it is different. The protests are in their second week and show little sign of abating.

They began on September 16 after the death of 22-year-old Mahsa Amini, who had allegedly violated the country’s conservative dress code, and quickly tapped into broader discontent with government corruption and deteriorating living standards. Authorities say 41 people have been killed, including protesters and police, and 1,200 arrested, while rights groups claim much higher figures.

A key reason protesters have been able to hold demonstrations and hold the world’s attention: They were ready to fight in cyberspace.

“In 2019, everyone was surprised that the authorities could impose a massive internet shutdown, but this time many predicted it would happen,” said Mahbod, a 27-year-old student at Tehran’s Sharif University. Like other interviewees, he only gave his first name for fear of reprisals.

Hackers and techies around the world have stepped in to help cyber-savvy activists organize, fight and dominate in the digital domain, a key battlefield that Iran’s leadership, more than ever, seems unable to do. to control.

Hours after the protests began, Internet monitor Netblocks reported a 33% loss in connectivity in Tehran, which later spread to other cities and provinces in Iran.

But activists quickly overwhelmed the government and turned to Instagram and WhatsApp, some of the few social media sites still working, to call rallies or set up rally points. They started a hashtag under the Persian version of #Mahsa_Amini which was retweeted by some 30 million people despite the shutdown. It has reached more than 100 million users, making it the most retweeted hashtag in Twitter history, Iranian opposition media say.

Then on Wednesday, the government restricted access to most social media, cutting it sharply between 4 p.m. and about 1 a.m., when most protests take place. The Apple and Google Play stores are blocked to prevent people from installing virtual private network (VPN) apps that they could use to evade surveillance.

Still, Mahbod’s more tech-inclined college friends share insights on what software and settings to use; It’s not uncommon for people to have four or five different programs to change depending on the day and the area.

“The VPNs we use are much more complex than they were a few years ago,” said Mehdi, a 39-year-old self-described computer geek from Tehran. “The cheap ones have to be changed every three or four days, but the more expensive ones with subscriptions work well.”

Aid has also come from outside Iran’s borders. The tech collective Anonymous has hacked government websites, including that of Iran’s Supreme Leader Ayatollah Ali Khamenei. On Sunday, he misled members of parliament, publishing lawmakers’ phone numbers and other information.

Meanwhile, on Friday, the US Treasury Department eased sanctions by authorizing tech companies to offer “secure external platforms and services” to Iranian users.

“As brave Iranians take to the streets to protest the death of Mahsa Amini, the United States is redoubling our support for the free flow of information to the Iranian people,” Treasury Deputy Secretary Wally Adeyemo said in a statement.

“With these changes, we are helping the Iranian people be better equipped to counter government efforts to monitor and censor them,” the statement added.

Tehran soon blocked access to the Starlink website, and dummy activation links containing malware were placed on the Iranian Twittersphere in an apparent attempt to lure anti-government protesters.

Foreign Ministry spokesman Nasser Kanaani said on Saturday that by relaxing communication-related sanctions but maintaining others, “the United States is hypocritically trying to advance its own goals against Iran.”

He added that “attempts to violate Iranian sovereignty will not go unanswered.”

Iranian tech experts working abroad have also joined the fray. Kooshiar Azimian, who runs the US-based biotech company 310.ai and is a former Facebook engineer, provides regular updates on his Instagram page about the latest method of accessing internet service in Iran.

A growing chorus of government officials threatens to punish those who take part in the riots.

Iran’s hardline judicial chief Gholam Hossein Mohseni Ejehi said on a visit to police headquarters this week that the protesters, whom he described as rioters, were “foot soldiers of the enemies of the Islamic Republic.” . Echoing earlier harsh statements by President Ebrahim Raisi, he declared that those who defy the authorities “will have no mercy.”

Karim Sadjadpour of the Carnegie Endowment tweeted that the government wanted to restrict access to the internet “so we can keep people in the dark.”

The best way the United States and other Western allies can help the Iranians, he wrote, is to prevent the Iranian government from blocking Internet access. The protesters’ best hope for change, Sadjadpour said, lies in “connecting with each other and with the outside world.”

The Khazani special correspondent reported from Tehran and the Times Bulos writer from Beirut.

Share
Facebook
Twitter
Pinterest
WhatsApp
Previous articleUniversity staff warned they could be fired for providing birth control
Next articleThree years ago he was in prison. He now he is ready to be the next president of Brazil.
RELATED ARTICLES
LATEST NEWS

Do you think Tom Brady is an ironman? George Blanda was still playing at 48 | NFL

TTom Brady, the 45-year-old Tampa Bay quarterback who is often said to be ageless, has broken just about every NFL record he can; ...
Read more

Autistic children face a higher risk of hospitalization if they are exposed to air pollution for relatively short periods, with boys more at risk...
Read more