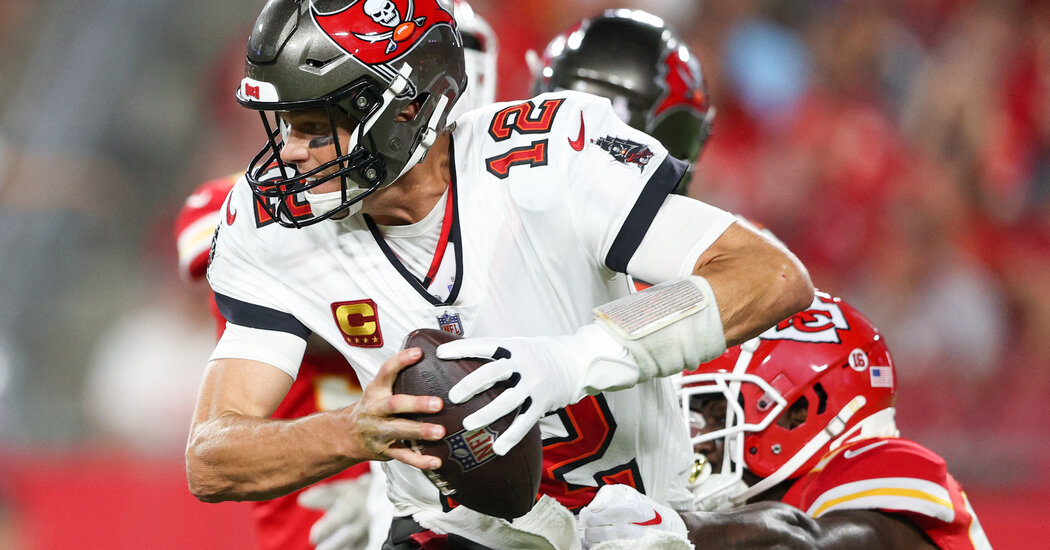 TAMPA, Fla. — Leonard Fournette, running back for the Tampa Bay Buccaneers, remembers passing dead bodies as he walked through the flooded streets of his native New Orleans after Hurricane Katrina hit in 2005.

Ten years at the time, he lived on a bridge with his family for nearly a week after the storm, he said, looting local grocery stores to survive. When Fournette, now 27, evacuated to the Miami area with his teammates last week ahead of Hurricane Ian, which left a trail of death and destruction that is still being assessed, the moment conjured up memories he’d like to forget.

“I know how bad it is, I know how it can get worse,” Fournette said last week. “I’m happy to get out of there, that our families and everyone is safe.”

In those nervous days before the hurricane hit Florida, it wasn’t even clear where or when Sunday’s Super Bowl LV rematch would be played.

As a precaution, Buccaneers players, coaches, staff and their families had fled south last week, out of the storm’s projected path. Setting up a temporary camp in Miami Gardens, they practiced at the Dolphins’ facility, which was available because the team played Thursday night on the road. There, the Buccaneers tried to prepare for the biggest game of their first season while wondering if the hurricane would take their homes.

“It’s a lot different when there are little kids running around the hotel and everyone is dealing with their dogs or their babies,” offensive tackle Tristan Wirfs said of the lead-up to Sunday night’s primetime game. “Was much”.

When Ian’s path was altered, bypassing Tampa and leaving the city largely unscathed, the team returned and, with city officials urging the NFL to play it as scheduled, the game went ahead. When it did, it was Kansas City, which won the much-anticipated matchup, 41-31, that seemed much more comfortable on the field.

Meanwhile, the Buccaneers (2-2) now face questions after another lopsided outing in which Tom Brady passed for 385 yards and three touchdowns, but the running game struggled to gain ground and the defense repeatedly failed to slow down the Chiefs. .

The game had almost started in another state. The NFL had selected US Bank Stadium in Minneapolis as the contingency site because its home team, the Vikings, played New Orleans in London on Sunday. But the storm’s path turned south, hitting Fort Myers and surrounding areas instead of Tampa. The airport and most other businesses, which closed before the hurricane, resumed normal operations on Friday.

A league spokesman said Thursday that state and local officials “encouraged” the NFL to keep the game at Raymond James Stadium. Tampa Mayor Jane Castor said in a statement the city could host the game responsibly while deploying aid to other areas of Florida, where the hurricane killed at least 80 people and caused billions of dollars in damage. Before the game, fans held up their cell phone flashlights in a moment of silence for the victims, and Buccaneers coach Todd Bowles wore a white Florida Strong shirt.

As the game wore on, however, disaster loomed over a marquee matchup between two of the league’s best teams in the same stadium where they had met in the Super Bowl in February 2021. The Buccaneers won that day. , 31-9, helped immensely by his ability to pressure and fire Mahomes.

Each took to the field on Sunday with a very different team. Brady, the 45-year-old quarterback who retired and didn’t retire this offseason, now throws to a receiving corps without Rob Gronkowski and Antonio Brown, who were key weapons during Tampa Bay’s Super Bowl run. Bowles became head coach in March after Bruce Arians retired and took a front-office position.

Kansas City has also made changes, mostly due to additions to its offensive line and the loss of wide receiver Tyreek Hill, who was traded to Miami in the offseason. His absence hardly seemed to matter against Tampa Bay: Kansas City took a 21-3 lead early in the second quarter.

Kansas City broke away from Brady and Tampa Bay in the second half with two field goals and another touchdown pass from Mahomes. The performance reinforced Kansas City’s belief that the offense can win without the speedy Hill: Eight players caught a pass from Mahomes.

“When you have a new group of people, you want to see how everyone fights adversity,” Mahomes said. “I think the boys responded.”

The Buccaneers had been led by their defense the last two games, but the unit struggled against Mahomes. Tampa Bay’s defense allowed more points than it had in its first three games combined, and its offense rushed for just 3 yards.

For a team that has Super Bowl aspirations in what, like every year, could be Brady’s last season, that formula won’t produce success. And the Buccaneers know it.

“It doesn’t matter what we did last year or the year before, nobody cares,” Brady said. “When you come up short, obviously we didn’t do a good job in any area and we have to do a better job.”

The tide was rolling in early in Alabama's game against Arkansas on Saturday, but it suddenly stopped.Bryce Young suffered a sprained shoulder in the...
Read more
SPORTS

GREEN BAY, Wisconsin. - Aaron Rodgers didn't think he would play another terrible half on Sunday against the New England Patriots, and the...
Read more

Behind the scenes of “The Incredible Race”

Behind the scenes of "The Amazing Race" - CBS News ...
Read more

Desperate mayors of Puerto Rico clash with Luma Energy, the private Canadian-American company in charge of power transmission and distribution, over how to restore...
Read more