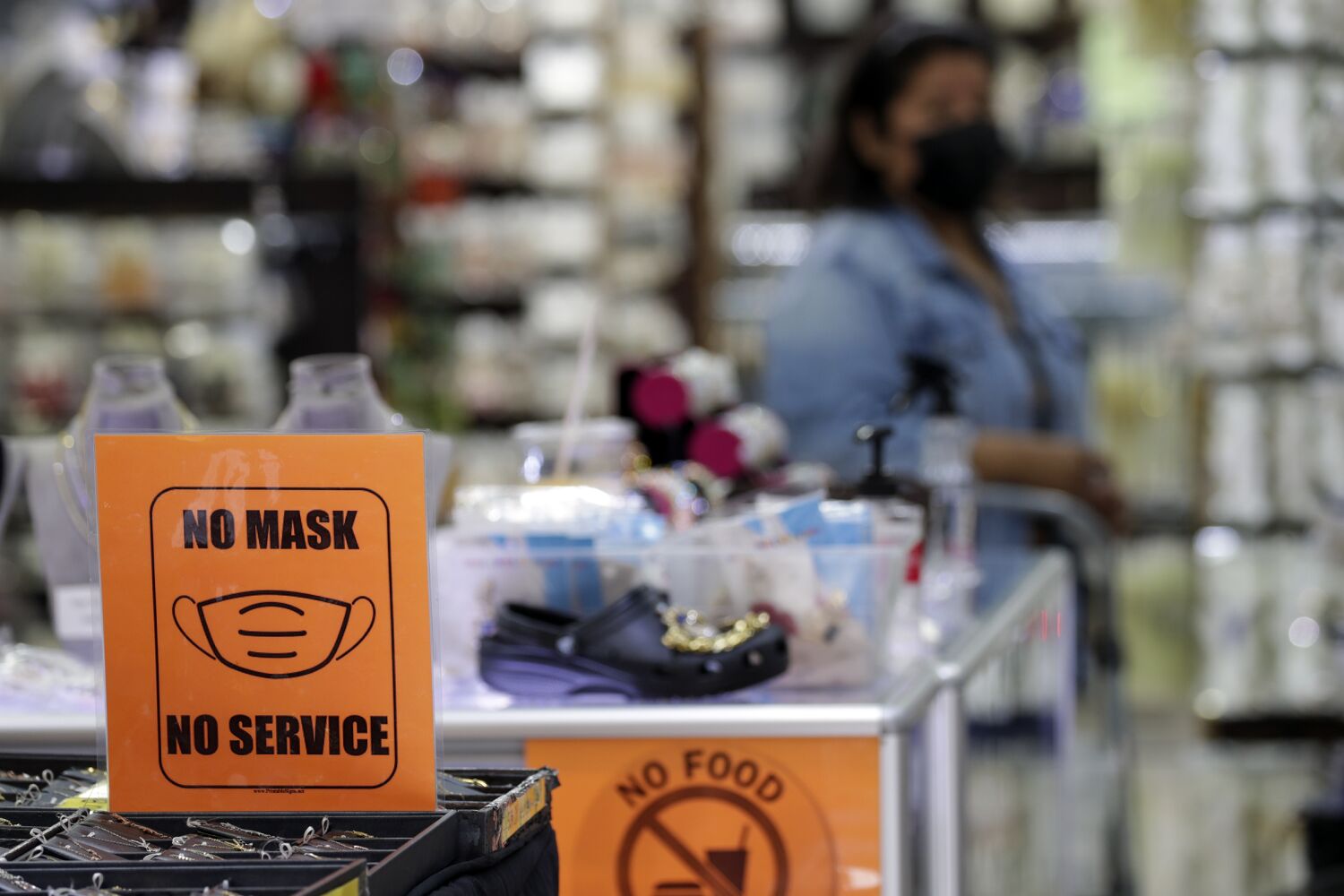 New coronavirus infections in parts of California may be rising even higher than winter’s Omicron wave, which could explain why so many people appear to be infected simultaneously.

The concentration of coronavirus levels in San Francisco wastewater is uniform higher levels than during the winter, according to data tweeted by Marlene Wolfe, an assistant professor of environmental health at Emory University.

The sewage data suggests that many infections are missing from officially reported coronavirus case counts. This is because many people use over-the-counter tests at home, which can be more convenient than getting tested at a medical facility, where the results are reported to the government.

“When you look at the [coronavirus] case counts, are no longer reliable. There are tremendous undercounts,” Dr. Robert Wachter, chairman of the UC San Francisco Department of Medicine, said at a campus town hall Friday. “And the number of cases now is probably not that different from what we saw during the massive spike in December and January.”

For this reason, Wachter said, he strongly recommends wearing a mask in closed public places “in the face of the immense number of cases.”

At UC San Francisco hospitals, 5.7% of asymptomatic patients test positive for the coronavirus, meaning 1 in 18 people who feel well nevertheless have the coronavirus. In other words, in a group of 100 people, there is a 99.7% chance that someone has the coronavirus and is potentially contagious. “Think about that the next time you go to a crowded bar or get on a plane with 100 people,” Wachter said.

“I would like the flight attendants to hold up a sign that says, ‘I can guarantee you someone on this plane has COVID,’” he said. “I think the rate of mask use would go up quite a bit.”

The spread of the disease prompted UC Irvine to renew the mandatory use of masks inside campus buildings on Monday, following the lead of other campuses like UCLA and school systems like San Diego Unified. UC Riverside also temporarily implemented an indoor mask mandate that expired last month.

In addition, the film industry has recently begun requiring the use of face masks on Los Angeles film sets.

“Globally, we are clearly in the midst of the sixth wave of the COVID epidemic,” UC San Francisco epidemiologist and infectious disease expert Dr. George Rutherford told the meeting. “This has been driven by the worldwide circulation of the new Omicron sub-lineages: BA.4, BA.5 and now BA.2.75.

“This is my way of saying: We’re not out of the woods yet,” Rutherford said, adding that the World Health Organization “recently said there’s no reason to consider that we’re near the end of this.” Last week, he noted that COVID-19 remains a “public health emergency of international concern.”

It is unclear how long this wave will last. dr Robert Kosnik, director of the occupational health program at UC San Francisco, said the current surge among employees and students has so far lasted twice as long as the fall and winter surge, which lasted about two months.

COVID fatigue is easy to set in, given the length of this wave. But, Kosnik added, “we still have to be vigilant.”

That means not going to work if you have symptoms, Kosnik said. Home coronavirus tests can give negative results for people on the first day or two of symptoms, even if they are contagious. Sometimes it takes two or three days after symptoms start for enough virus to have replicated in the body for the rapid test to become positive.

“The symptoms are pretty tortuous in my mind,” Kosnik said, and some people who don’t know they’re infected think the symptoms are just from allergies or a cold.

“If you have symptoms and you test negative, you still have to assume you might have COVID,” Wachter said.

The latest models from California suggest the virus is spreading at an even faster rate. Starting Monday, the California COVID Assessment Toolpublished by the state Department of Public Health, said the spread of the coronavirus is likely increasing, with each infected Californian likely transmitting it to 1.15 other people.

BA.5, the Omicron sub-variant driving this latest wave, “isn’t exactly a completely new ballgame, but it’s definitely a new entry and we have to take it seriously,” Wachter said.

One challenge with COVID-19, he added, has been that once we learn a pattern of how the disease works, “our brain locks into that. And we assume that they will remain true. And then when they go fake, it’s kind of hard for us to pivot.”

That is what is happening now, Watchter said. Some patterns remain similar: new subvariants keep emerging that are even more contagious. Additionally, Omicron infections appear to cause less severe illness than Delta, the dominant variant of the coronavirus, last summer. During the Delta spike, about 5.6% of coronavirus cases in Los Angeles County required hospitalization, but during the winter’s Omicron wave, only about 1.2% of cases did.

Regarding BA.5, “what is different, and this is where it is a game changer, is the level of immune escape, and particularly the degree to which immunity from previous infection, including previous versions of Omicron, It doesn’t seem like it counts as much,” Wachter said.

So it’s wrong to think that if you’ve survived a coronavirus infection, you no longer have to worry about COVID-19 for maybe three months, Wachter said.

“We’re seeing reinfections as early as a month after a previous infection,” Wachter said. “You can’t count on the COVID ‘superpowers’ from your previous infection plus vaccination to be completely risk-free for the next three to four months, which is really the way we used to think about it a few months ago. ”

Wachter said it’s not clear whether reinfections, on average, are more, less, or the same severity as a previous infection.

But he quoted a recent preprint to study from scientists at Washington University and the Veterans Affairs Saint Louis Health Care System suggesting that people who were reinfected “fare worse in the long run.” The study suggested that reinfected people are at increased risk of long-term death, even after the acute infection has resolved, in addition to other health problems.

“Compared with people with the first infection, reinfection contributes to additional risks of all-cause mortality, hospitalization and adverse health outcomes,” the study said, including in organ systems involving the cardiovascular, renal , neurological and gastrointestinal and increase the risk of diabetes. fatigue and mental health disorders.

“It’s worth assuming that getting re-infected is a bad thing, that once you’re infected, you have a little bit of extra immunity, but not that much. And you should go back to your previous position of trying to be careful,” Wachter said.

That’s why it’s important to catch up on shots and boosters, Wachter said. Federal officials have said not to expect a specific boost from Omicron that could come in the fall; If you’re eligible for a first or second booster, get it now and you can still get an Omicron-specific booster later.

Existing vaccines, even if not specifically designed against the latest subvariants, still help reduce the risk of hospitalization and death, even if they are relatively less effective at preventing infections in the first place.

A report published by the US Centers for Disease Control and Prevention on Friday found that the effectiveness of the vaccine that protects against hospitalizations or emergency room visits decreased five months after the second dose of the vaccine COVID-19. That’s why it was so important to get a booster, and a second, when eligible, according to the report.

Nobel Prize in medicine awarded for research on evolution

STOCKHOLM (AP) — This year's Nobel Prize in physiology or medicine was awarded to Swedish scientist Svante Pääbo for his discoveries about human evolution.Thomas...
Read more

The WNBA improves charter flights for the finals

UNCASVILLE, Conn. — There were “oohs and aahs” of excitement as the Connecticut Sun players boarded their charter plane en route to Las...
Read more

The whole world, we can freely say, has gone crazy over Tamadoge.ancientTamadoge constantly has something that we all thought the hype would at least...
Read more