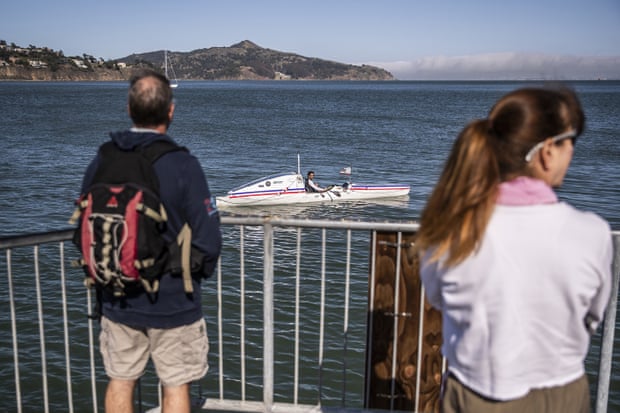 After three months at sea, rationed meals and a brush with a tropical storm, one from the San Francisco Bay Area became the second person to successfully kayak from California to Hawaii.

Cyril Derreumaux arrived in Hilo early Tuesday on his second attempt to complete the 2,400-mile journey, which he documented on social media.

“It was a magnificent adventure, clearly also a spiritual journey,” Derreumaux said in a statement. “Before I left I couldn’t really explain why I wanted to take on this challenge, but I finally found all the answers to my questions in the water. I loved sharing my journey with everyone who was following me on the map or on social media.”

The 46-year-old has been working on the project for four years. He first intended to ship in 2020, but he canceled those plans due to Covid. Last year, rough seas and a damaged anchor derailed his first attempt after less than a week. A US Coast Guard helicopter rescued him on the outskirts of Santa Cruz.

Derreumaux began this year’s trip in Monterey in June in a 23-foot-long kayak equipped with a water desalination system and an interior cabin. The journey, which required at least nine hours of paddling a day, was not without its challenges.

His kayak developed a leak that flooded a compartment and he was forced to shelter inside the boat for two days as it intersected with Tropical Storm Estelle. Derreumaux, originally from France, had to manually pump water for nearly two hours a day after a machine broke down.

He was at sea three weeks longer than initial estimates indicated and had to ration food for the last leg of the 91-day, nine-hour voyage, landing in Hilo instead of Honolulu as planned.

“I found all possible weather conditions during these three months. Very rough seas in which I had to stay locked in my cabin, without being able to sleep, it was so moving, but also an ocean that can be so calm that it transforms you deeply so much that it fills you with tranquility”, Derreumaux said. “I lived moments of pure magic in which all the elements came together: the calm of the sea, the calm of the currents, the calm of the winds and the visit of a bird in the middle of nowhere.”

Ed Gillet was the first person to successfully complete the journey from California to Hawaii using a kayak in 1987, with the help of a kite. in 2020, Lia Diton traveled from San Francisco to Honolulu in 86 days, by rowboat instead of kayak.

Dozens more have attempted the journey. Last summer, 19 people tried to cross the Pacific in small boats, according to the San Francisco Chronicles. At least two people have died in the effort since 2019, the newspaper reported.

ICMAI CMA 2022 exam dates declared on icmai.in; Here’s how to fill out the form

Will cover about 80-90% of India with 5G in next two years: Vaishnaw

How companies should set, and report, DEI goals

It is time to protect our high seas

Washington tests whether abortion can save the Senate for Democrats

ICMAI CMA 2022 exam dates declared on icmai.in; Here’s how to fill out the form

Will cover about 80-90% of India with 5G in next two years: Vaishnaw