Home BUSINESS A 95-square-foot apartment in Tokyo: 'I wouldn't live anywhere else'
BUSINESS 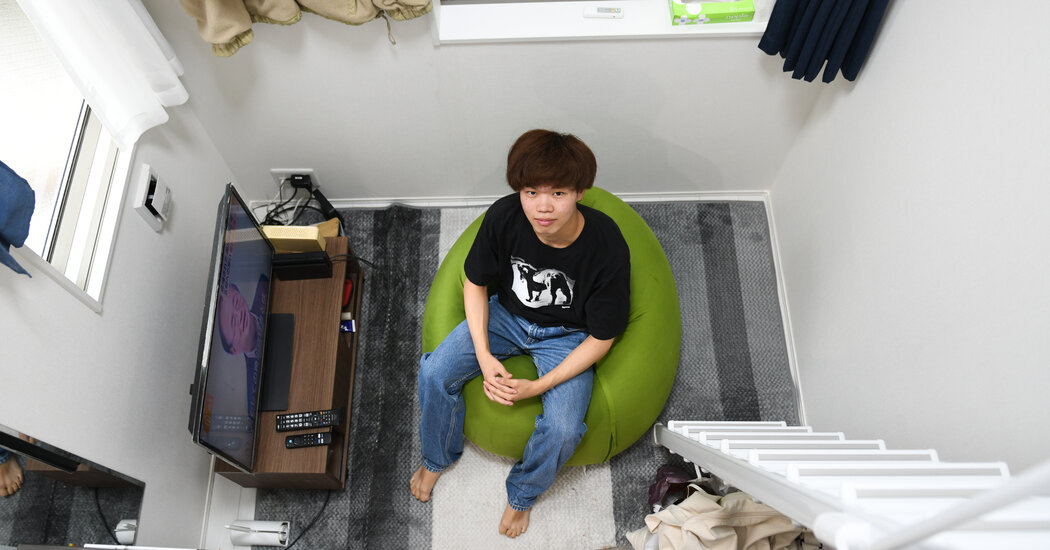 TOKYO — At the end of a long day at work in the offices of Japan’s professional baseball league, Asumi Fujiwara returned to her apartment and changed into pajamas. She wanted to get in a little exercise before bed, so she placed her vinyl yoga mat on the floor in front of the toilet, rolled it past the stove’s single burner and single-slot toaster and onto the foot of her desk.

After stretching a bit, she stood up to assume a warrior’s stance. However, instead of fully extending her arms, she tucked her elbows into her sides. “I need to modify my poses or I will hit something,” said Ms. Fujiwara, 29.

Such is life in a 95-square-foot Tokyo apartment.

With its high real estate prices and the most populous metropolitan area in the world, Tokyo has long been known for its small accommodations. But these new apartments, known as three-tatami rooms, based on the number of standard Japanese rugs that would cover the living space, are pushing the boundaries of normal living.

One real estate developer, Spilytus, has been leading the charge toward ever smaller spaces. It has been operating these shoebox apartments since 2015, and with more than 1,500 residents now in its 100 buildings, demand has remained strong.

While the units are half the size of the average studio apartment in Tokyo, they do have 12-foot ceilings and an attic-style loft for sleeping. They’re also stylish, with pristine white floors and walls, and with an efficient layout, it’s possible to fit a washing machine, fridge, sofa and desk inside.

The apartments are not for those on a really tight budget. Cheaper apartments can be found, although they are usually decades old. But the micro apartments, which rent for $340 to $630 a month, cost a couple of hundred dollars less than other studio apartments in similar areas. And they’re located near central Tokyo hotspots like Harajuku, Nakameguro, and Shibuya, which are usually quite expensive with upscale boutiques, cafes, and restaurants. Most of the buildings are close to subway stations, the top priority for many young people.

More than two-thirds of the buildings’ residents are in their 20s, who in Japan earn an average of $17,000 to $20,000 a year, according to government data. (Salaries in Tokyo are on the high end.) Some are attracted by the minimal up-front fees and the lack of a deposit or “gift money,” a non-refundable payment to the landlord that can be as much as three months’ rent, for many rentals.

Small spaces work for the lifestyle of many young Japanese people. In Japan, it is not customary to receive guests at home, and almost a third of Japanese people say they have never had friends at home, according to a study. poll by Growth From Knowledge, a data provider for the consumer goods industry.

Ms. Fujiwara hasn’t even had a partner in the nearly two years she’s been living in her apartment. “This space is for me,” she said.

Many Japanese, young and old, also work long hours, leaving little time to spend at home. And a growing proportion of people in Tokyo live alone, making smaller spaces more desirable. These people are more likely to eat out or grab one of the many prepared meal options at convenience stores or supermarkets, so a full kitchen is less necessary.

Yugo Kinoshita, 19, a college student who works part-time making meat bowls at a restaurant chain, is among those for whom an apartment is little more than a place to sleep.

When his shift ends, it’s an hour before midnight and he’s exhausted. He eats his free staff food, goes to a public restroom “sento” and passes out by the time he gets back to his Spilytus unit. Otherwise, his days are filled with doing schoolwork to get his nutrition degree and seeing friends.

When you spend a few waking hours at home, the box that acts as a TV stand transforms into a study desk and kitchen counter. To clean the floor, all you need is a lint roller.

Even after having to say a teary-eyed goodbye to his collection of Nike Dunks because there was no room for them, Mr. Kinoshita said that at this point in his life, he “wouldn’t live anywhere else.”

For some residents, the tiny apartments offer a gateway to long-delayed independence.

Two years ago, 26-year-old Kana Komatsubara started looking for an apartment to finally move out of her parents’ house in suburban Tokyo.

She wanted a newly built space, easy access to work, and a toilet and shower in separate rooms (a common request in Japan), all within her relatively tight budget. She wasn’t necessarily looking for a microunit, but her search led her to a Spilytus apartment.

“Of course, the bigger the better. It never hurts to have a bigger space,” she said. “This was simply the best option for me at the time.”

On a recent afternoon, Ms. Komatsubara, a nail stylist, walked a minute from the nearest subway station in Tokyo’s Shinjuku district, through a narrow alley lined with dilapidated houses, and opened the front door of her apartment building.

She went up three flights of narrow stairs (the buildings don’t have elevators) to her room, which was behind one of the identical burgundy doors that lined the common hallway.

Inside, a tiny “genkan,” or entrance, had enough space for exactly three pairs of shoes. A 20-inch-wide hallway led to the main room, past the kitchen sink, where Mrs. Komatsubara leaves a tube of toothpaste and a bottle of mouthwash.

Store your work equipment, such as blue light machines for gel nails and mannequin hands for practice, in the space intended for a washing machine. A plastic garbage bag hanging from the doorknob needs to be taken out almost daily.

One of the benefits of modest living, he said, is less ice cream. Your mini fridge lacks a working freezer, so you eat less. That, coupled with his daily boxing routine, means he’s gotten into better shape.

Ms. Fujiwara, the baseball league employee, was drawn to her micro-apartment after the pandemic started. She had been living in a shared house, but not having room for herself while working from her home caused her stress and anxiety.

Her smaller space has pushed her to live more sustainably, she said. “Small living has helped me think twice every time I want to buy something new,” she added.

However, hanging next to her sink is a stack of about 40 brown paper cups. “I don’t have room to dry the dishes,” she said.

She and Mrs. Komatsubara wish they had more space for their clothes, which they hang neatly in their attics. Mrs. Komatsubara goes to her parents’ house at the beginning of each season, most recently to trade her crop tops for sweaters.

Both women gave up washing machines (you expect them in most Japanese apartments) to use space more efficiently, and instead go to a self-service laundromat once or twice a week.

Mr. Kinoshita has a washing machine, but no dryer, so he hangs his wet clothes on the railing where his curtains should be. He, too, cannot do some of his nutrition career homework at home, because his kitchen is too small.

Mrs. Komatsubara has decided to move out of her apartment because she wants something even cheaper.

“As I’ve gotten older, my requirements, what I want from an apartment, have changed,” he said.

mein the world of china video game warcraft the phrase chongta describes storming a castle before being equipped with the proper weapons and armor....
Read more
BUSINESS

Vladimir Putin may force half the workers at Russia’s largest airline to join the military, report says

Vladimir Putin announced the Russian military mobilization in a speech on Wednesday.The Russian leader can force at least helped the staff of Russia's largest...
Read more

NASA has revealed the clearest view of Neptune's rings in more than 30 years. He posted four stunning similar images on his instagram account. 4This was...
Read more

HHow hard can it be to keep a toilet clean? I can't remember the last time I used one in a cafe, restaurant,...
Read more